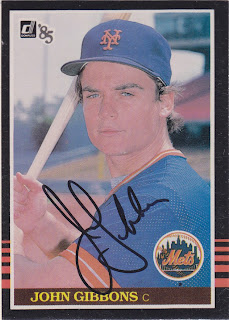 John is the former Blue Jays skipper who is now the bench coach for the Royals. I was able to get this card signed at the first Royals game I went to this year. John was nice enough to sign after batting practice and he signed all three cards that I had.

As for his playing days, John only appeared in 18 Major League games. He appeared in 10 in 1984 and he went 2-31 at the dish. He got his next cup of coffee in '86 and he went 9-19 that time around and collected his only big league home run. He played at the AAA level the next four seasons, but he never made it back up as a player.

This is the only 1985 Donruss that I have signed.

There is less than 24 hours left to get in on the Grienke SI/Price card contest. If you haven't entered yet, there is still time.
at 9:22 PM