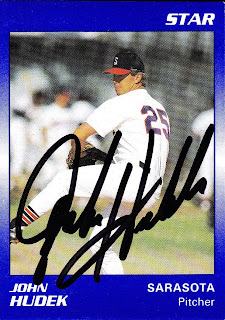 Here is another card that was obtained at Astros Fanfest. This is also another case of "why is this guy here?".

John Spent his first four years in the Majors as a reliever in Houston. In two of those years, he didn't even have 20 appearences. In the other two, he made at least 40. In his rookike season, he had 16 saves. That was a career high.

After his fourth year in Houston, he was traded to the Mets for Carl Everett. After 30 games with the Mets, he was traded to the Reds for Lenny Harris. He started the next year in Cincy, but got released after two appearances. The Braves picked him up for 15 games (and a few in Richmond) before letting him loose. The Jays thought that a third time might be a charm and signed him. He made three appearances for them (and a few with Syracuse) and was released after the season was over. The Cardinals signed him for the next season, but he must have been released during Spring Training since he has no stats for the season.

Anyway, does this sound like the type of alumni that you would invite to fanfest? I had a hard time just finding a couple of minor League cards of him. I couldn't find any Major League cards even though they do exist.

As for the team on this card, it is the Sarasota White Sox of the Florida State League. There is still a team in Sarasota and they are affiliated with the Reds. I bet you can't guess what their name is.

This is the third card that I have signed from this set. The first one is Moises Alou and the second one is Bill Masse.
at 10:58 PM

Heck, I wouldn't care if they played one inning; if they had a card showing them in an Astros uniform I want it signed! Sometimes the easiest way to get it signed is at a convention...so I say bring 'em on.

I probably have a few extra Hudek cards as an Astro. It's a little late now but if you want one I can look and see.

Don't worry about looking for another Hudek card. I doubt that I run will across him again. But, thanks though.

I obviously like autographs of just about anyone. I was just saying that because if I went to Royals fanfest and they Dave Howard and Kevin Koslofski there instead of Frank White or Willie Wilson, I would be very disappointed (especially if they did it more than once). That is all I'm saying.

I'm not complaining about getting his autograph. It is just that I would expect a little more for Fanfest.

On a side note, if you could email me Hal Lanier's address, I would really appreciate it. I just bought an older card of him that I would like to get signed.