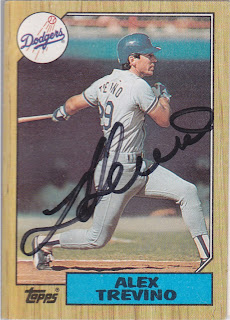 Here is the second of three cards that Alex signed for me at Astros Fanfest. As I said in the last Trevino post, Alex was mostly a backup catcher and he only appeared in over 100 games twice. He never played in a playoff game and was never an All-Star. But, I did get three cards signed by him. Nowadays, that would be difficult to do since most card sets don't include very many backup catchers, or even bullpen pitchers.

That is why it was really fun to collect cards in the '80s (I'm sure it was a blast before that, too, but I wouldn't know). You would pull cards of the same common players year in and year out and they are still names that you recognise today. With todays sets, most players will get a rookie card and that may be all if they are not a starter or a closer. Upper Deck makes some cards of these types of players, but not all of them and not every year. If only Topps was still making their Topps Total set, I wouldn't be ranting on about this.

Anyways, here is the signed card from the backup catcher. I will have one of him coming up later this week.
at 3:51 PM

That is true. Not enough variation of players in most sets.

They should bring back Topps Total or UD 40 man at least for one year.

I didn't realize it myself, but Alex played for the Reds in 1990 for 7 games. Which means, he got a World Series ring. As far as I know, any player that was on the roster during the regular season gets a WS ring. Way end a career, huh?