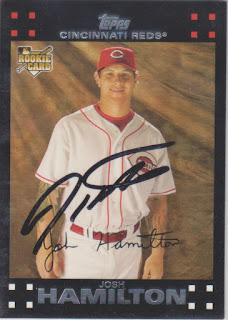 Here is the second card that Josh Hamilton signed for me at a Rangers game in 2008. I posted the first card over five years ago and that one can be seen here.

The first card I posted of Josh showed him with the team that drafted him, Tampa Bay. Here he is with the Reds, the team that he made his Major League debut with. After being out of baseball for three seasons because of his drug addiction, Josh came back in 2006 and played in 15 games in the New York Penn League. He hit .260 with 3 doubles and 5 RBI. He must have shown signs that he was ready to break out because the Cubs picked him up in the Rule V Draft and promptly sold him to the Reds.

His time in Cincinnati lasted just one season. That year, he got into 90 games and hit .292 with 19 home runs and 47 RBI. That is really good considering that the highest level of baseball before that was 23 games of AA ball six years prior. After that season, the Reds shipped him to the Rangers for Edinson Volquez and another pitcher. Josh went off in the home run derby that next season and has pretty much been a household name ever since.

I got to see Josh play one time with the Reds. It was at Wrigley Field and Josh pinch hit in the eighth inning of a tied game. He hit a two run home run to propel the Reds to a win. It was pretty awesome. I have seen him play nine more times since then and have seen two more home runs. But, that first one, as a Red, was the most memorable.
at 10:28 AM 1 comment: 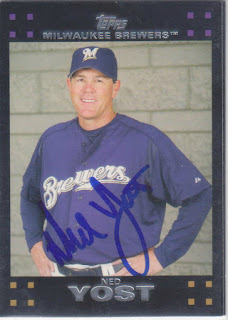 I hope you all have a great Thanksgiving!
at 10:00 PM No comments: 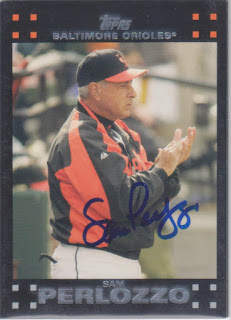 I think it is strange that the manager cards from 2007 Topps lack that facsimile signature that all of the rest of the cards from the set have. Topps did the same thing in 2008, as well. I have no idea why that it the case, but they sure do work better for autographs without it on there. Luckily, Topps has not done that since the 2008 set.
at 10:48 AM 2 comments: 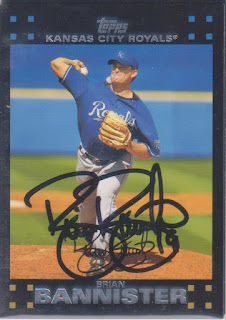 I have posted a few cards of Brian Bannister before, but this is the first one of him as a member of the Kansas City Royals. The Royals got him from the Mets after the 2006 season in an exchange for Ambiorix Burgos. Considering that Burgos went on to have a multitude of legal problems, I would say that it was a good trade for the Royals.

Brian pitched just one season for the Mets and he went 2-1 with a 4.46 ERA. He appeared in eight games with six of them starts. He struck out 19, but walked 22.

I have said it before and I will say it again. Brian has one of the best and most consistent signatures I have ever seen. Every time I got him to sign, he took his time and gave me the best autograph that he could. I asked him once about his perfect looking signature and he told me that I should see his dad's. So, I sent an '81 Donruss to Floyd and I was impressed. But, I must say that I like Brian's better. Floyd's was actually readable, though.

I got this card signed by the Royals parking lot in 2008.

I am pretty sure this card is a photoshopped version of Brian's '06 Topps and Bowman cards. It is not the same photo, but is from the same sequence of photos.
at 12:51 PM No comments: 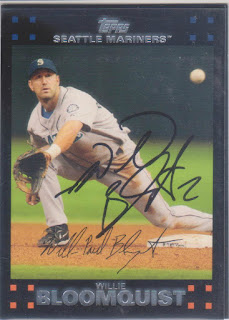 Back-to-back Mariners on here. That does not happen very often.
at 6:01 PM No comments: 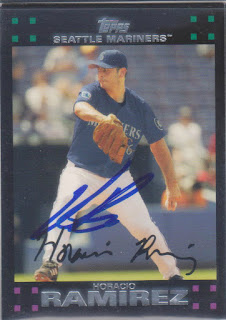 Here is the first of three cards that Horacio Ramirez signed for me one day while he was with the Royals. I got the cards signed after a day game day in 2008 while Horacio was signing from the Royals parking lot. That was the good old days when Royals actually signed before and after games from the lot.

Horacio was drafted by the Braves out of high school in the fifth round of the 1997 draft. He made his Major League debut with Atlanta in 2003 and made 29 starts with the team. He was an impressive 12-4 during his rookie year, but his 4.00 ERA and 100 to 72 strikeout to walk ratio says that he probably got lucky that season. But, those 12 wins and 100 Ks were career highs for him.

The heavy workload in 2005 must have hindered Horacio in 2006. That season, he made just fourteen starts for Atlanta and had four in the minors. In the Majors, he was 5-5 with a 4.48 with 37 Ks and 31 walks. After the season, the Braves flipped him to Seattle for Rafael Soriano. 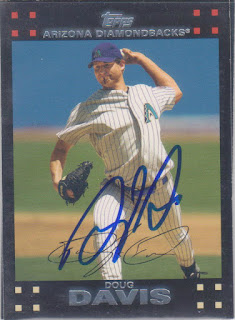 Somehow, I have neglected to post on here for two and a half weeks. I have no idea where the time has gone and have no excuse for the lack of posts. At this rate, and with the holiday season coming up and a child on the way, I do not see things getting any better in the near future. But, I have this weekend off and will try to get s couple of cards in before my crazy work month officially begins.

Here is the first of three cards that Doug Davis signed for me in 2012 while he was with the Omaha Storm Chasers. I got the cards signed at a game in Oklahoma City. Doug was not starting that day, but I was able to coax him out of the dugout to sign right before first pitch. Even though his Major League career was unofficially over at that point, it was still cool to add some signatures from a seasoned vet.

Speaking of vets, Happy Veterans Day to all that have served!
at 10:13 AM No comments: