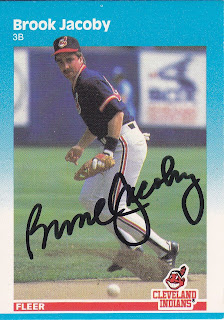 Well, I'm back from my little vacation and I had a great time. I thought that I was done posting '87 Fleer cards for now, but I got this one signed on Friday and I figured that I would post it before I moved on to the '87 Topps.

I got this card signed on Friday at the Royals game. The Reds made their first trip to Kauffman since 1999 and Brook is their batting coach. I was able to get him to sign just before batting practice began. He was standing at the top step of the dugout while all of the players were stretching. After I called over to him, he came by and signed all three of my cards. While he was signing, one of the trainers had to stop by to see some cards of Brook. It was like he didn't really believe that Brook used to be a Major Leaguer.

It has been a long weekend and I'm tired and I have many autographs that I have to sort out, so this is all for this post. Tomorrow, I will have pictures, scans, and stories of the weekend. I will also be mailing out the prizes from the contest.
at 10:56 PM

Did you get Von Joshua's autograph in time? I heard today he got called up to the Cubs as their new hitting coach.

I guess it's a good thing that I went to Saturday's game and not Sunday's. But, yeah, I got him.