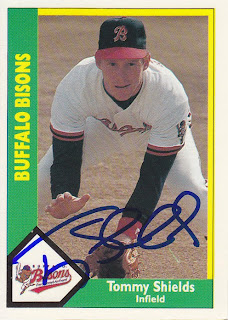 This is a card that I got signed at Spring Training last year. Tommy is the manager of the Royals Rookie team in Burlington, North Carolina and I was able to get this card signed after the minor leaguers worked out the day I was there.

Since this was the only card I could find of Tommy, I assumed that he never made it to the Majors. Turned out that I was wrong. He played in two games with the Orioles in 1992 and then played in twenty games with the Cubs the following year.

In his two games with the O's, he was only used as a pinch runner. He never played the field or stepped into the batters box. Both times he pinch ran, he was running for Sam Horn. Sam pinch hit on both of those occasions and walked both times. Brady Anderson made the third out of each of those innings, preventing Tommy from scoring and recording an actual stat. Luckily, Tommy made the Cubs roster out of Spring Training the following season. It would have been sad to have played in two games and only been used as a pinch runner.

With the Cubs, Tommy hit .176 with 4 runs and an RBI. He played one more season for the Cubs AAA affiliate before retiring and moving on to coaching. He got his first managerial job in 1996 when he managed the Orioles Gulf Coast League team.
at 1:22 PM 1 comment: 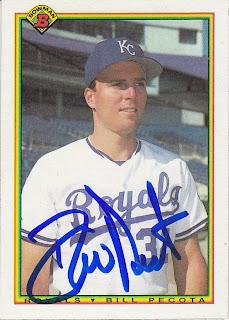 Here is the next card from Bill Pecota that I got signed at Royals Fanfest last month. This one is on his 1990 Bowman card. This is only the third card that I have signed from the set. One of the other signed cards from the set was obtained at Royals Fanfest five years ago and the other was given to me by another blogger. For whatever reason, I do not have a lot of cards from this set. This was before Bowman became all about the rookie and was high end. I guess I didn't buy too much of it because I was still a little weary after the '89 set came out slightly bigger than a normal card.

Bill played for the Royals for six seasons. During that time, he played ever single position on the field, including pitcher and catcher (not in the same game, though). He got a majority of his playing time at third, though. 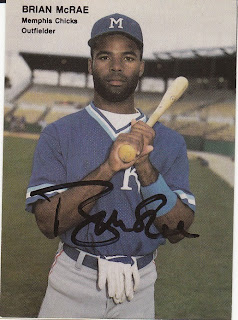 Here is another Brian McRae card. This one was signed at Royals Fanfest in 2013.

This card comes from the 1990 Best set. This was a year before Best teamed up with Classic and sold their minor league cards to the masses. While these cards did come in packs, I encountered very few of them. In fact, I think the only packs I ever bought came from a vendor at a flea market.

I like the lack of a border on the front, but it would be much better if all of the pictures were not posed. Still, there are some good cards in the set such as Bernie Williams, Jeff Bagwell, and Frank Thomas.

I think this card is kind of strange because Brian is wearing his Memphis Chicks hat and road pants, yet an actual Royals batting practice jersey. I have no clue where the picture was taken, but it doesn't really look like a Florida Spring Training park. Maybe the Royals provided all of their minor league affiliates with Royals batting jerseys back then just to help cut down on cost. Who knows? 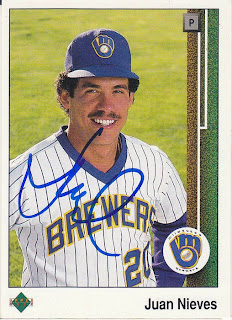 Here is the third and final Juan Nieves card that was signed for me while Juan was the White Sox bullpen coach in 2012. You can see the first one here and the second one here.

Sorry for the lack of posts this month. At the last minute, we decided to head down to Arizona for a second straight year of Spring Training. So, I spent the two weeks prior to that just trying to get cards sorted out to take on the trip. I have a hard enough time getting cards ready to 'graph the visiting team in Kansas City. This year, I attended four games and 'graphed six different teams. Needless to say, it took me the entire two weeks to get ready.

In the end, I had a really good time. I attended four Spring games, including a Royals game where I sat in the second row behind their dugout. I can't afford to do that during the regular season. Plus, I got to see my first NHL hockey game and a Wichita State/Arizona State baseball game. I ended up getting 88 cards signed and one ball, Tommy Lasorda. I didn't get any big name current players on cards, but I did get two prized prospects- Cubs Jorge Soler and D-Backs Archie Bradley. In fact the best non-prospect card that I got signed was by a guy who has signed about a dozen cards for me- Royals Eric Hosmer.

Plus, I am the only one at work with a tan.

Hopefully, I will get back to my semi-regular posting.
at 10:46 PM 1 comment: 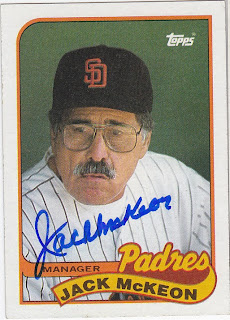 Here is the third and final card that Jack McKeon signed for me through the mail in 2011. Jack finished up that season as the Marlins interim manager after Edwin Rodriguez got canned seventy-one games into the season. When Jack took over, I figured that would be a great time to send him some cards and I sent three out to him in August. I posted the first one over two years ago and it can be seen here. The second, which is my favorite of the three, can be seen here.

Jack managed four Major League clubs in his career- the Royals, A's, Padres, Reds, and Marlins. In his sixteen seasons at the helm of a team, he had a winning record in ten of them. He never lead a team to a first place finished, but his teams came in second six times. One of those teams that finished second was the 2003 Marlins that cliched the Wild Card spot and went on to win the World Series. That was Jack's lone venture into the post-season.

Jack's 1999 Reds club came very close to making the playoffs, though. They finished the season 95-67, one game behind the Astros. They ended up in a tie for the Wild Card with the Mets, so they played game 163 to see who moved on to the playoffs. The Reds dropped the game 5-0 and the Mets went on to the NLCS before losing to the Braves.

As if my posting hasn't been sporadic enough over the last few years, it is going to be pretty bad this month. The fam has decided to make the trek out to Arizona again this year. I want to get a ton of autographs while I am out there, so I have a lot of sorting and searching to do to get ready. So, don't be expecting a whole lot out of this blog until April.

By the way, I love the photo of Jack on this card. That mustache is something else.
at 8:40 AM No comments: