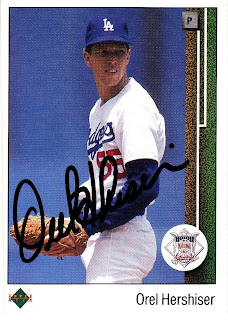 It is fitting that I am showing this card tonight. If you recall, I got a few things signed by Orel prior to the opening game of the College World Series. Well, tonight is the final night of the CWS and it looks like LSU is going to pull it off. As always, it has been another great CWS.

There really isn't much to say about this card that wasn't said in my initial post of the CWS. I guess that I can add that I almost didn't take this card with me on my trip. The night before I left, I was searching through my '89 Upper Deck cards looking for a card of one of the Reds coaches. While doing that, I came across this card and I set it aside just case I needed it. So, it went with me as a backup. I had planned on getting a card and a ball signed by Orel. But when I found out that Gaylord Perry was signing, I saved the ball for him and got this card signed by Orel instead.

This card commemorates Orel's 1988 Cy Young Award. That is why it has the National League logo on it instead of the Dodgers.

This is the last card from the '80s for at least a month. This is the first card on here of a player whose first name starts with an "O".
at 9:20 PM

Good call on bring the card! Great autograph. I wouldn't mind having a signed Hershiser myself. Nice!

Believe it or not, I think I need that card.