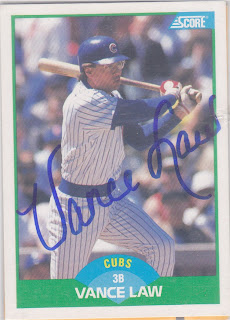 This is the third and final Vance Law card. You can see the first one here and the second one here. Just like the last two, this one was obtained at the Kansas State-BYU game.

One thing that I have to say about Vance is that he is the slowest signer that I have ever seen. Brian Bannister signs super-slow and he has fourteen letters in his name. Vance probably takes as long as Brian does, but he only has eight letters in his name. But, at least he signs his name identically every time. Look at the three cards. There is little variation. Head over to Cards in the Attic and check out his Vance Law post and you will see five more examples of Vance's near-flawless signature.

Vance is a human auto-pen.

Since this is the last post for Vance and for autographs obtained at the Kansas State game, I figured that I would throw in some pictures of the ballpark*. So, here is Tointon Family Stadium, home of the Kansas State Wildcats. 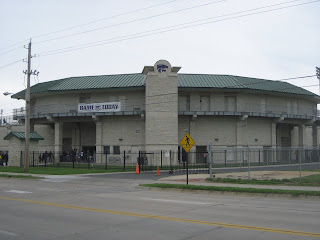 I played in an American Legion tournament there over ten years ago and the place was a dump then. It was hard to believe that a D1 baseball team played there. It was just a ball field, not a ballpark. But, around the turn of the millennium, the Tointon Family put up some money to completely renovate the site. Now, they have a nice and respectable ballpark that makes recruiting much easier for the coach. And it is starting to show since they made the NCAA tournament this year for the first time ever.


Here is a picture of the field. It may not look different at first. Look again. 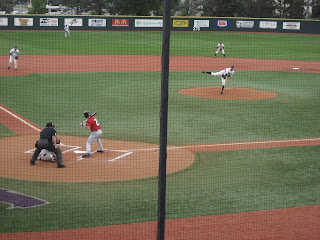 That is a field turf infield. The only dirt on the field is around the plate and the mound. That was new to me when I went to the game. I actually worked at that ballpark in 2002 when I was a student there and it was a regular infield then. According to the head groundskeeper, who I happened to work with back in the day, the turf was put in about three years ago. I had seen a few places like that on TV (Louisville and Oregon State, I think), but this is the first one that I had seen in person. So, there are now three ballparks in Kansas (one pro and two college) that have a turf infield and grass outfield.

Vance's sig looks a lot like his dad's, Vern.

You are right-on there.

Your Vance autograph inspired me to send him a card. That signature is a thing of beauty.