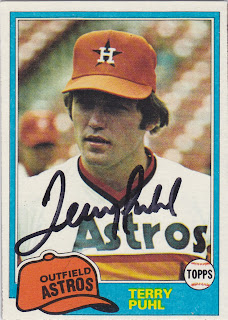 Here is the second Terry Puhl that I got signed at Astros Fanfest. I had got a third one, but I traded it to Tom of the Astros Baseball Cards blog.

Nice card! And thanks again for the trade. Looking forward to seeing Hal on your blog.

It will be coming up next week. And, thank you for the trade, as well.