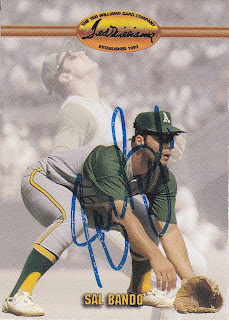 This card was a gift to me, I guess you could say. Back when I was basically given the '69 Topps Frank Howard card, this card was thrown in. I had the Howard card on my want list and Scott, from A Pack A Day, filled that void for me. I sent him a self-addressed stamped envelope and he sent the card to me. When I got the card back, I noticed a weird inscription under his return address. It said "You stole my A's". I had no idea what that meant until I opened the envelope and saw this card. Scott is from Philly and I live in Kansas and am a Royals fan. Once I put two and two together, I thought that it was pretty funny. Thanks, again, Scott.

Speaking of funny, I have had kind of a funny day. I woke up early and drove for three hours to Kansas City for the Royals game. I got there just before noon and set up shop by the Royals parking lot. When I got there, it was cool and cloudy, just like the weather report predicted. Then, it started to mist and then rain (not in the forecast). Then it stopped. I got a couple of Royals to sign for me while it was dry. Then it started misting again and that continued for the next two hours. By the time that I had had enough, I was up to 21 signed cards and I was cold and wet. So rather than go get something to eat and get ready for BP (which I was pretty sure they would not be having), I got in my car and drove the three hours back home. What a day. Only a couple of the cards smeared because of the persipitation. After the best pitcher in baseball (right now) signed my three cards, I figured that I had had a good enough day.
at 6:54 PM

No seriously, that's awesome. Why'd you decide to bail on the game though? They're crushing Toronto right now. Kind of surprising actually. I almost picked up Purcey in my fantasy league as a spot start; glad I didn't.

I tried to get Sidney, but he pulled out a new tactic on me. Usually, they just pull out their cell phone, but he popped in his head phones and completely ignored me.

As for bailing, I was cold and wet and didn't quite come prepared for the cold weather. And no visiting team BP is always a minus for me. But, I made it home in time to watch the entire game and I'm warm and dry.

But, this certainly isn't something that I usually do. I think that the constant drizzle and the two smudged autos were about all I could take.

I think it's kick ass that Sal signed over his entire body on that card. Nice.