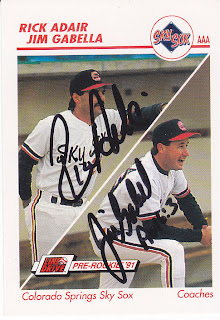 I originally posted this card about two and half years ago and that post can be seen here. The original post only contained Jim Gabella's signature, so I am re-posting the card now that I have been able to add Rick Adair's signature to the card.

A few weeks ago, I was browsing the blogs when I noticed a post on The Great Orioles Autograph Project that included a signed Orioles postcard of Rick Adair. I didn't even realize that Rick was with the O's now and I left a comment asking Ryan what Rick's signing habits were. The O's are in Kansas City in May and I have tickets to one of the games. So, I was basically just trying to gauge what my chances of getting Rick's autograph at that game were going to be like.

Much to my surprise, Ryan emailed me the next day saying that he was heading down to Florida for Spring Training and that if I sent the card to him, he would try to get it signed for me. So, I did just that and Ryan obviously got it signed.

Thanks a lot, Ryan! I really do appreciate it.

This is definitely the oddest card that I have signed by two people. The photos are split up a little differently than usual. But, both coaches signed the card at the same angle as the line that divides them and it came out looking great.

This is actually the second card that is signed by two players that Ryan has helped me out on. A few years ago, he got the ball rolling on a 1987 Fleer John Stefero/Kevin Seitzer card. You're the best, Ryan!
at 2:28 PM 1 comment: 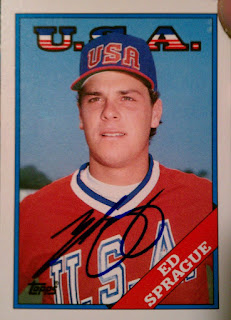 First off, I am sorry for the absence of posts over the last month and a half or so. Between work, going to the gym, and a great new girlfriend, I have had little time to do anything else. Anymore, I may come home and shower and grab some clothes, but I spend most of my time either at work or at her place. I still check out the other blogs when I get a chance, but this blog has kind of been put on the back burner for now. I am hoping to get in a sporadic post every once in a while, but I doubt that it will be anything like it was anytime soon.

Having said that, here is my first signed card this year. This card features the former Blue Jay, Ed Sprague. Ed is the head baseball coach for Pacific and I was able to get this card and two others signed by him at a Kansas State baseball game this past Sunday.

I had plenty of cards of Ed to choose from, but I wanted this card because I have always enjoyed Team USA cards. I didn't own the card, so I purchased it from checkoutmycards. I ordered the card about two weeks before the game and I was a little disappointed when it hadn't arrived by Saturday. So, I called my local card shop and, although he didn't have this card as a single, he did have the '88 Topps Traded set in stock and said it would be about ten bucks. I wasn't sure if I wanted to spend that much for basically this card, but I said screw it and went downtown to get it. When I got there, the owner was nice enough to drop the price down to four dollars since that was what they were going for online. I was a little surprised to hear that line from him, but I certainly appreciated it.

Having overcome that obstacle, I was feeling good until game day came. The problem that morning was my girlfriend. This was our first baseball game together and she doesn't quite understand why I have to get to the park so early to get autographs. Hopefully, she will grasp this new concept sooner rather than later. So, needless to say, we were running behind. Instead of getting to the park a half hour before first pitch, we got there maybe ten minutes before. I started to make my way over to the Pacific dugout to maybe get my cards signed when the coaches went to the plate to exchange lineup cards. That seemed like a bad time for that and all of the Pacific coaches were wearing jackets, so I couldn't tell who was who anyway.

Instead, we went and found a seat and had a great time at the game. K-State ended up winning 9-3 and my girl's little boy got a baseball from an usher and a free t-shirt from the mascot.

Towards the end of the game, we moved down by the Pacific dugout and I was still struggling to figure out which coach Ed was. Three of the four coaches looked really similar. Eventually, I found a guy wearing a Pacific hat and I went and chatted him up. He was from California and was out for the game and was nice enough to point Ed out to me. As soon as the game was over and Ed headed for the clubhouse, I asked him to sign and he signed all three cards for me. I brought some cards for my girl's son to get signed, but he was in line to run the bases by that time and missed out. Maybe next time.

I miss posting cards that have a story with them. I think that was one of the reasons I went so long between posts. The next card I was planning on posting was a Brian Bannister card and there really isn't much more to say about him than what I said in the first two or three cards I posted of him. Maybe I need to reevaluate the way I do things here.

So, there is my Ed Sprague story. While some of you are lucky enough to be 'graphing in the Florida or Arizona sun, I am stuck braving strong Kansas winds at college games to get mine. But, it is better than nothing. I'm going to a Wichita State game a week from today and former Met Jeff Duncan will be in town with Purdue. I just realized this today, so I don't have time to order any cards of him. I luckily have an '03 Ultra card to get signed, but I wouldn't mind a couple more. If anyone might be interested in a 50/50 trade, just let me know.

*I was feeling lazy and didn't want to warm up the scanner, so this photo was taken with my phone. Sorry about the thumb.
at 6:04 PM 1 comment: