Even though the College World Series is not over, my College World Series Contest is. Brian, from Play at the Plate, ran the bracket on the A side and picked both of the final teams. Whichever team wins doesn't matter as no one is able to catch him. Congratulations Brian!

Unfortunately, Brian, it is my girlfriend's birthday this weekend and than I am heading to Alabama Monday morning for work. But, I will get your prize out during the first week of July. Sorry about the delay. I hope you enjoy your prizes and I want to thank everyone for playing. See you next year!
at 12:01 AM 2 comments:

I got back from Omaha late Saturday night and here are the prizes I was able to acquire while I was up there. They are signed 8x10s of Hall of Famers Johnny Bench, Barry Larkin, and Jim Palmer. 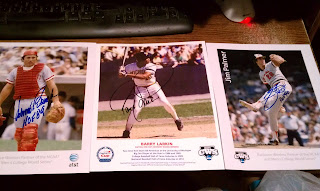 I should have an update tomorrow on where everyone is standing through today. Stay tuned.
at 9:49 PM 3 comments:

To fill out a bracket for the third annual College World Series contest. Make sure you get in on it before 4 pm central today. Just leave a comment on the previous post to get in. Good luck!
at 4:00 AM No comments:

In case you haven't noticed, I've been running a little contest here for the past two weeks that revolves around the College World Series. Seventeen people have already entered and have a tiny head start. But, it is not too late to get in on the action. There are plenty more points to be earned and no one is even close to locking this thing up yet. So here is all you have to do- fill out a College World Series bracket. 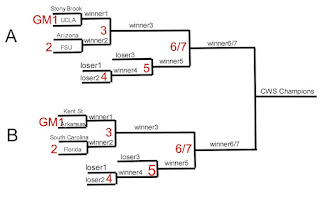 Here is a how the bracket breaks down. There are two groups in the bracket- A and B. Each group has six games is it. All you have to do is guess who is going to win each of the games as they advance towards the championship round.

For instance, group A has Stony Brook and UCLA squaring off in game 1 and Arizona and Florida State going in game 2. Pick who is going to win each of those games and then those two teams will square off in game 3. The losers of games 1 and 2 will then square off in game 4. Then, the loser in game 3 plays the winner of game 4 in game 5.

At that point, there will be one team left in the group that is 2-0 (winner of game 3) and one that is 2-1 (winner of game 5). Those two teams play in game 6, which is an elimination game. If the 2-0 team loses, they play a game 7 and the winner advances to the championship. If the 2-0 team wins game 6, they go straight to the championship without game 7. BUT, for the sake of this bracket, I am going to count it as one game. Just pick who you think is going to advance. It doesn't matter how they do it. I am going to call it game 6/7.


For the sake of the tie breaker, do not pick a number already chosen by someone else. Even if your teams don't make it to the finals, the tiebreaker will still apply to you in the event of a tie.

If you guess every game right, including how many games will be played in the finals, you can come out with 22 points. In the past, I have done a winner and runner-up. But, this year there will be just one winner. As for the prizes, I haven't figured that out yet. It will probably mostly consist of stuff brought home from Omaha.

The field is set for the College World Series next week and we have our first official scoring update. Here is how things stand through the Super Regionals. Again, if you think I might have screwed up your score, let me know.

I will have the bracket up Tuesday evening. Make sure you check back then so you can enter the main phase of the contest. The CWS starts a day earlier this year, so there will be less time to get the bracket filled out.
at 11:22 PM No comments:

The Super Regionals are set and here is how we are looking so far. These are the teams that are still in it. Keep in mind that all of these teams are two losses away from elimination and two wins away from the College World Series. Just because you have teams on this list does not mean you already have points.

So far, Matt Perry has the best chance of coming out on top through the Super Regionals as he has seven teams teams still competing this coming weekend. But, anything can happen.

Keep in mind that this is just an update, not an actual score. But, if I missed one of your teams, please let me know so that I can get that changed.

The Super Regionals start on Friday and the eight CWS teams should be known by Sunday.
at 9:43 PM 1 comment: