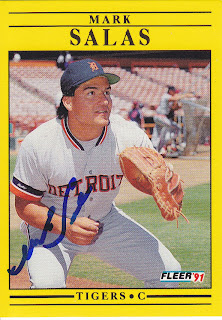 Here is the second card that I got signed by Mark Salas after a Royals game about a month ago. I had three cards for him to sign, but he only signed two of them. He signed for one other guy that also had three cards of him, signing only two for him as well. I don't know if that is his standard practice or a compromise for having to sign in the heat with a suit on.

On the White Sox website, Mark is listed as just a coach. Not a base coach or hitting coach, just a coach. But, if you click on his name and go to his bio, it lists him as the bullpen catcher. Mark is close to 50 years old. He must have some super knees or something. I doubt that any other team has a former Major League catcher as a bullpen catcher.
at 5:49 PM

I recently handed Angel Salome FIVE cards since I had him alone and nobody else needed his autograph. He fanned through the cards and said, "I'm only going to sign three."

I told him that would be fantastic, then watched as he signed all five.

I had that happen with Willie Wilson. He said that he was only going to sign one. He signed it and said "ahh, screw it" and signed the other two.

Fascinating stuff about him being a bullpen catcher. I'll keep an eye out this series against Chicago.

Funny, I saw that signature and the first thing I thought (other than how amazing the pose is) is that the signature really looks like an afterthought, or like he was interrupted. Your 90 degree suit story really brings this to life!

I'm almost five years late on this, but I came across it while looking for Mark Salas cards o see if he had any with the Indians.

Salas is always a 2-per signer in-person. By mail, he'll usually do four.

A few other teams do have former MLB catchers as bullpen catchers: Jason Phillips is with the Mariners at the very least.

Mark actually signed three for me a week and a half ago in KC.

As for Phillips, he has got to be at least twenty years younger than Mark. I am still amazed that he does it.

I've never seen a card of Mark as an Indian. I have White Sox, Tigers, and Twins cards signed and I know there are a couple of Yankee ones out there.

Good luck and thanks for reading!