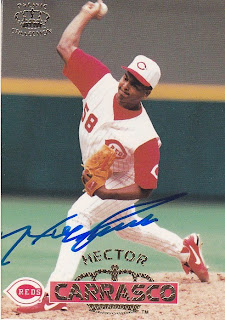 Here is the second of three cards that Hector signed for me at the American Association All Star Game this summer. Luckily, I have more than 300 cards to post between this one and the next Carrasco card. So, this might seem like the final card of Carrasco, for now.

This past season, Hector pitched for the American Association champions, the Shreveport-Bossier Captains. He finished the season with a 2-4 record with 22 saves and an ERA of 3.83. His 22 saves was good for second in the league. In the playoffs, he pitched 9 scoreless innings while picking up 3 more saves.

I was looking forward to seeing Hector pitch in the All Star Game, but it was not to be. Apparently, Hector had better things to do that night and he ended up heading to the clubhouse after the first inning, never to be seen again. It's not like the South squad needed him as they rolled the North 12-3. They could have avoided pitching their starting shortstop for the final two outs if he would have stayed, though.

But, it not like I never saw Hector pitch. I got to see him pitch two times in the early 2000s with the Twins in Kansas City.
at 11:06 PM