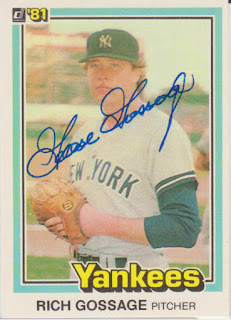 Sorry about the lack of posts lately. But, on a whim, the family decided to go to Spring Training this year. So, all of my free time in the the two weeks leading up to that was finding cards for the trip. All the time sorting paid off as I was able to get 94 cards signed in Arizona this spring.

Here is the Goose Gossage card that I got signed through the mail last summer. It was fairly well know that Goose charged for his signature through the mail ever since his induction to the Hall of Fame in 2008. But, last summer, I started noticing successes from him for free. So, like my Spring Training trip, I sent this card to him on a whim, without a donation, and it came back signed about five weeks later.

Needless to say, I was very excited to get this card back. While I have a few sigs from Hall of Famers from this set, this was the first one that was signed through the mail. On top of that, just look at that signature. That sig on this card is hard to beat. 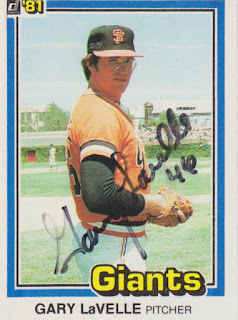 This is the third card of Gary Lavelle that I have posted on here. I originally wrote to Gary in 2011 when I obtained his '78 Topps card in the Topps Million Card Giveaway. I did not own this card at the time, so I added a card from the '85 Fleer Update set to get signed. I finally bought this card three years later and sent it to him in early 2014. Gary had it back to me in less than ten days.

Gary was a two-time All Star for the Giants as a reliever. Over his career, he had three 20 save seasons. He racked up 136 during his career, with all but 9 coming with the Giants.

When I posted my first card of Gary in 2011, he was fourth on the Giants all time saves leaderboard. At the time, he was behind Brian Wilson and I speculated that Brian might be in first after the 2012 season. It turns out I was completely wrong on that guess as Brian only pitched in two games in 2012 before joining the Dodgers in 2013.

It looks like Gary's fourth place spot should be secure for the time being. I have no clue who the Giants closer is now, but Sergio Rome and Santiago Casilla have both joined other teams and they were the two closest active players to Gary. Casilla was only four saves behind him.

I am heading to Arizona next week, so this might be my last post until I get back from Spring Training. Follow me on Twitter (@zmills40) to see all the cards I am getting signed down there. 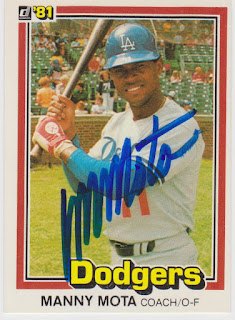 How cool is this card? If you are not sure, just look at the position listed on it- coach/OF. By 1980, Manny was the Dodgers batting coach. But, once the rosters expanded in September, he got activated as a pinch hitter. He went 3-7 down the stretch with 2 RBI. Manny did not play at all during the strike-shortened 1981 season, but he did get one more at-bat in '82 at the age of 44.

Somehow, Topps failed to capitalize on making a card of Manny in 1981. The two new kids on the block did, though Fleer left out the coach part of the position.

I got this card signed through the mail in 2014. Manny is a broadcaster for the Dodgers and I mailed the card to the team. It took less than three weeks to get it back.

Are you tired of '81 Donruss yet? This card basically marks the halfway point of the set. Even though I have posted about 25 cards from the set, I think I only have 18 more to go and two of those are of Hall of Famers. 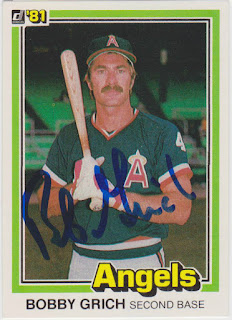 Last night, I posted a card that I got signed through the mail last summer and I referred to it as one of my more recent additions to the '81 Donruss collection. Well, here is my most recent addition. I got this one signed through the mail just last month. I have had this card for nearly eight years, so I have no idea why I never sent it to Bobby before. But, I noticed a success from him in early February and gave it a shot. Two weeks later, I had this back to me.

When I first got into cards in 1985, Bobby Grich was not a big deal to me. He was at the end of his career and would only appear in sets through the 1987 season. All I knew about him then was that he had a big mustache.

All of these years later and I know that Bobby was a hell of a ballplayer in the '70s and early '80s. Playing for the Orioles and Angels, Bobby made six All Star teams over the years and he won four Gold Gloves at second base. He probably would have won more if it wasn't for Frank White. His teams made the playoffs five times, but could never clinch the pennant. 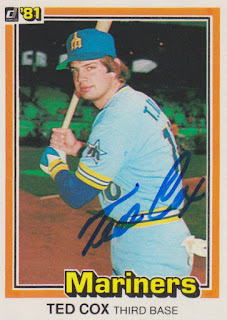 Here is one of the more recent '81 Donruss additions to the collection. This one was obtained through the mail just last year. I sent this card to Ted at the beginning of July and I had it back three weeks later.

Ted played in the Majors for just five seasons with the Red Sox, Indians, Mariners, and Blue Jays. Out of those teams, the Indians were the only team that he played with for more than one season. Over his five seasons, Ted hit .245 with 10 home runs and 79 RBI.

The former first round draft pick of the Red Sox got off to a good start when first called up in 1977. He got four hits in his Major League debut before getting two more hits in his first two at-bats the next night. As far as I can tell, Ted still holds the record for six straight hits to start his career. He ended up hitting .362 in his 13 games with Boston that season. 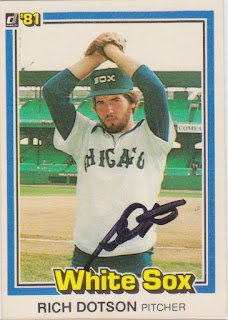 Here is the next TTM success from the '81 Donruss set. This one was sent to Rich in 2013 and I got it back a week and a half later.

Rich pitched in the Majors for twelve seasons with the White Sox, Yankees, and Royals. All but two and a half of those seasons were with the Sox and he spent the majority of his career as a starter. Though he had a losing record for his career, which was a result of an 0-4 record in his final season, he still had seven seasons with double digit wins. He finished his career with a 111-113 record with a 4.23 ERA and 973 strikeouts.

Rich's best season was with the Sox in 1983. He was pretty good that year, going 22-7 with a 3.23 ERA and 137 strikeouts. The wins, ERA, and K's were all career bests for him. Despite the great season, he did not make the All Star team that year. Instead, he got his lone All Star selection the following season.

I love those White Sox jerseys. 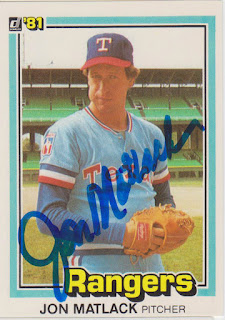 This is the second card of Jon Matlack that I have posted on here. I posted the first one about four years ago and it can be seen here. That one was a card that I redeemed through the Topps Diamond Giveaway. Unfortunately, I did not own this card at the time or I would have sent it along with that one and posted it four years ago. I am not exactly sure how I acquired this card, but I most likely bought it since I am too lazy to post an '81 Donruss want list on here.

When I sent that first card to Jon in 2012, it came back "return to sender". I waited a bit and resent it to the same address and I got it back the second time. That time, I mailed the card to Texas and I got it back from New York. When it was time to send this card out, I could not find Jon's address. Luckily, Ryan from The Great Orioles Autograph Project, hooked me up with Jon's new New York address and I got this card, and one other, signed in eight days.

Jon spent the second half of his career pitching for Texas. Through six seasons, Jon logged just 200+ innings twice and ended up finishing up his career mostly pitching out of the bullpen. He had two double digit win seasons as a Ranger and finished his time in Texas with a 43-45 record with 3 saves and a 3.41 ERA. 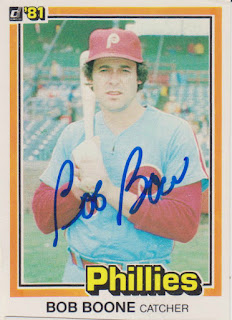 Here is another player from the '81 Donruss set that would later go on to manage. This is the card of Bob Boone that I got signed through the mail in 2014. It took about three weeks to get this card, and one other, back from Bob.

Bob had a nineteen year career catching in the Major Leagues. Over that time, he did it all. He won one World Series, played in seven postseasons, made four All Star teams, caught a perfect game, and won seven Gold Glove Awards. That is an impressive resume. On a side note, I had no idea that the Phillies made the playoffs so many times in the late '70s. They were like the National League version of the Royals which would have made the 1980 Series that much better.

Bob managed the Royals and Red for six seasons and did not do too hot. He finished with a 371-444 record as a Major League manager.

I got this card signed by sending it to the Washington Nationals, Bob's current employer. He serves as the the team's Vice President, Senior Advisor to the General Manager.