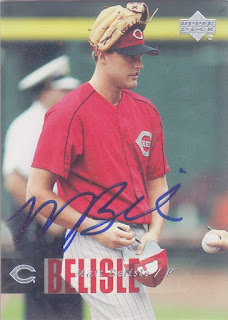 Here is a card that I got signed at Kauffman Stadium in 2010. I went to The K that day for the 1985 World Series softball game and I got there before the gates opened in the hopes that I could get some autos from the old-timers when they arrived at the park. Unfortunately, all of the old-timers arrived in a bus and didn't sign at all outside of the park. But, I did get lucky enough to get a few of the Rockies players when they arrived and Matt was nice enough to sign both cards that I had of him.

I took a couple of friends with me that day and one was a really good friend that is never able to get out to the ballpark. He had always heard of my autographing exploits and was looking forward to see me in action. So, we got to the main gate and he pulled up a seat on one of the limestone blocks outside of the park and opened a beer. Minutes later, a cab pulled up and it was time for me to get to work.

One of the things I hate about 'graphing outside of the park is identifying the players without their uniform on. It is hard enough to do it when they are warming up in jackets and it is a whole different ballgame when they are in their street clothes.

Anyways, a guy got out of the cab and I had no clue who he was. Luckily, there was a nice crowd outside of the park that day and someone pointed out that the guy was Joe Beimel. So I walked up to him as he was signing some things and I handed him my cards to sign. He took one look at them and handed them back to me and said "that's not me". I didn't have any cards of Joe and, in the heat of the moment, I got Joe Beimel and Matt Belisle mixed up and I handed him my Belisle cards.

To this day, whenever I am around my friend and the conversation turns to baseball or autographs, he always pulls out the story of the first time he saw me try to get an autograph. It is a little embarrassing for me, but he sure gets a good chuckle out of it.
at 10:59 AM 3 comments: 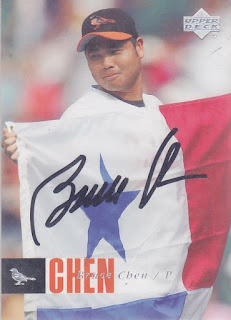 This is one of the first Bruce Chen autographs that I ever got. I got this card signed in June of 2009 in Des Moines, Iowa while Bruce was a member of the Omaha Royals. The O-Royals played a doubleheader that day and Bruce pitched a complete game shutout in the second game that night. It was only a seven inning complete game because of minor league doubleheader rules, but a shutout is still a shutout.

Most of the cards that I got signed that day were autographed between games of the doubleheader. Two of the exceptions, though, were the two cards that Bruce signed for me. Since he was pitching the second game, he did not sign between games, but I was lucky enough to get him outside of the ballpark after the game. I was actually kind of surprised that Bruce signed because his wife and kid were waiting outside of the park for him. Nevertheless, Bruce still signed for everyone. He only signed 2/3 for me. But, under those circumstances, I was really amazed that he even signed at all.

Bruce has been a consistent presence for the Royals pitching staff since the end of that season. His 12-8 record and 3.77 ERA last season was even good enough for him to be named the Royals Pitcher of the Year. He has had a rocky 2012, though, as his ERA is currently at 5.68 while his record is 7-9.
at 8:06 PM 1 comment: 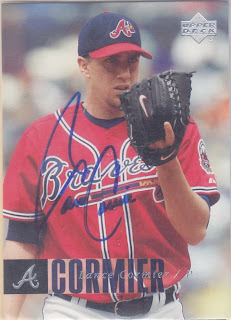 Here is the third and final Lance Cormier card that I got signed at a Royals game in 2010. Lance was playing for the Rays at the time and he was nice enough to stop and sign all three cards for me. The first card I posted of him can be seen here and the second one here.

When I posted the last card of Lance last season, he had just been designated for assignment. That appears to have been the end of his career as I cannot find any stats of him for this season. He finished his career having pitched for the Diamondbacks, Braves, Orioles, Rays, and Dodgers and he was 24-28 with 3 saves and a 5.03 ERA.

I am pretty sure I mentioned this on the last two cards I posted of him, but I really like Lance's signature. Out of the three cards he signed for me, though, this one is my favorite. I like how his autograph kind of blends in with the blue line on the tomahawk on his chest. If one did not know any better, it might be thought that that was part of his signature.
at 6:47 PM 1 comment: