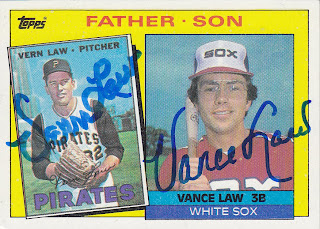 This card has two autographs on it and I have two stories on how they were obtained. The first one that I got was Vance's. I got him to sign a few cards for me in Manhattan, Kansas when his BYU Cougars took on the Kansas State Wildcats. Vance is the manager of the Cougars. Luckily, there was a post on Cards in the Attic about Vance coaching at BYU. Otherwise I would not have known about him being involved in the college ranks.

After I noticed that K-State was ranked this year, I decided that I needed to go to a game since I hadn't been to one since I went to school there and actually worked for the athletic department. So, I looked over the remaining schedule and this was the one game that stood out to me, just because of Vance Law. When I started to look for some cards of Vance, I tried to find three featureing three different teams he palyed with. All I could find were Expos and Cubs cards until I finally came to this one (I also had an '81 Topps that had two other players on it, but I didn't want to use that one). After I found this card, I went to The Bench to see if Vern was a through the mail signer and it looked like he was.

So, the day after I got Vance's signature, I sent this card to Vern. There was a report on The Bench that he was signing cards TTM, but he charges $8. So, I sent this card to him along with a check and I had my card back a week later. Apperantly, he will sign one card for free (which he actually wrote on the back of the envelope). But if you want a second one signed, it will cost you $8. Rather than send my check back to me, he sent me another card that he signed for me. So, now I have a signed Vern Law card that doesn't have Vance on it. The card is from the 2003 Topps All-Time Fan Favorites set and I think that I may have already had it.

Overall, this turned into a nice looking signed card. Both father and son appeared in one All-Star game. Vern made the team in 1960 with the Pirates and Vance made it in 1988 as a Cub. But, Vern won the 1960 NL Cy Young award when he posted a 20-9 record and led the Bucs to a seven game upset of the Yankees in the World Series. Vance, on the other hand, only played in two LCSs and he was a combined 2-14 in them.

To everyone invloved in the contest, I wnated to wish you all the best of luck and thank you for taking part. If this post seems a little off-par, it's because I have been trying to follow the game while typing and it doesn't seem like I have been doing very well at either one. Also, thanks to JRJ at Sports Locker for getting a few last-minute entries in the contest and Kris at Cards in the Attic for indirectly informing me that Vance is coaching at BYU.
at 6:14 PM

zdude, that card is very nice!

Was Vance a nice man or what?

That's pretty cool having a father and son card signed.

Great card and a great story!

Vance was great. I asked him one question and got way more out of him than I ever would have expected.