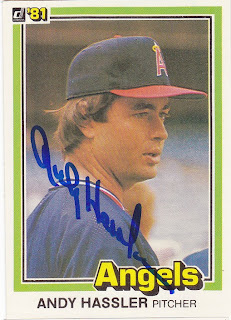 Here is the second of two cards that I got signed by Andy Hassler last year. The first card was his '78 Topps card that I acquired in the Topps Diamond Giveaway. That card was posted in February and it can be seen here. 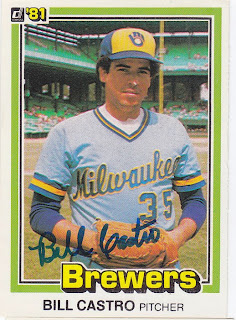 Here is one of two Bill Castro '81 Donruss cards that I was able to get signed through the mail last year. Bill was the Orioles bullpen coach that year and I originally sent this card to him with about a month left in the season. November rolled around and I had not gotten that card back. But, I had noticed some successes coming from his home address, so I mailed off another card to his home. That is the card that is posted here and it made it back to me after nine days. Then, a month and a half later, I got the first card back that I had sent to Baltimore. So, if anyone is needing a signed copy of this card, let me know. I have got an extra.

Like I said, Bill was the bullpen coach for the O's last year and he started out this past season in the same role. Then the O's pitching coach, Rick Adair, took a leave of absence from the team in August and Bill stepped up to fill that role. It appears that Adair is not going to be with the club next season and Bill is going to interview for the job. So far, Andy Hawkins is the only other name mentioned to be in contention for the job. He was the bullpen coach for the Rangers this past season. 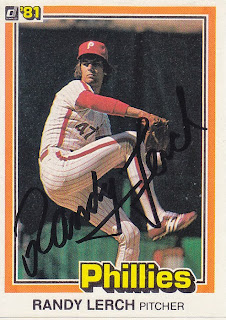 Next up is the Randy Lerch card that was signed through the mail. Randy signed two cards for me in just ten days.

Randy's career spanned eleven seasons with the Phillies, Brewers, Expos, and Giants. He started during the first half of his career before shifting to the bullpen in the second half. He went 60-64 with 3 saves and a 4.53 ERA in his career.

This is the last action card that I have to post during this go-around of '81 Donruss. It is also the last card where the picture was not taken at a Chicago ballpark. 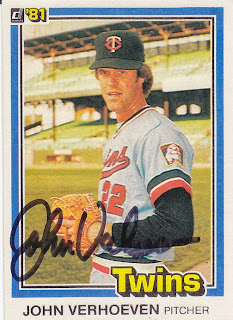 Here is the card of John Verhoeven that I got signed through the mail in January. It took just eight days to get this card back.

John pitched in the Majors for parts of four seasons. He spent time with the Angels, White Sox, and Twins and spent his entire short-lived career pitching out of the bullpen. He went 3-8 in his career, winning his first game four years after making his Major League debut. He also recorded 4 saves while posting a 3.79 ERA. 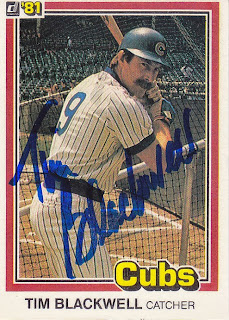 Back to back Cubs catchers? What are the odds?

It is kind of funny because I had no clue that Tim Blackwell was even a catcher until I started to write this post. I've seen plenty of cards of Tim before, but I just assumed he was a middle infielder. He is listed as 5'11" and 180 pounds. There is quite a difference between him and yesterdays Cubs backstop, Barry Foote, who comes in at 6'3" and 210 pounds. Barry looks like a catcher. I can't say that about Tim. Tim does make up for his smaller frame by wearing one of the more memorable mustaches of the era, though.

Tim played for ten seasons with the Red Sox, Phillies, Expos, and Cubs. He was predominantly a backup throughout his career except for the 1980 season. That year, he started 93 games behind the plate for the Cubs. He responded with career highs in every single offensive category including batting average. He hit .272 that year (almost 50 points higher than his career mark) with 5 home runs and 30 RBI.

In 1977, Tim and Barry Foote were traded for each other when the Phillies and Expos swapped battery mates.

Since this card does not do Tim's mustache enough justice, here is link to a better picture of it. Check it out.

I almost forgot to mention that Tim signed this card for me through the mail in just seven days. 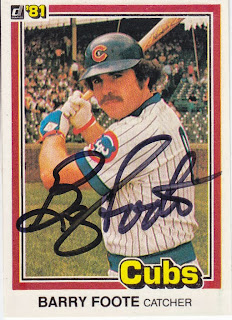 Here is the Barry Foote card from the set that I was able to get signed through the mail. I originally sent this card to Barry about a year ago. But, he had apparently moved just prior to me sending the card out and it got returned to sender. So, I sat on the card until March and sent it out to his current address. He signed this card and one other in three weeks on the second attempt.

Barry played in the Major Leagues for ten seasons with the Expos, Phillies, Cubs, and Yankees. He was mainly used as a backup catcher, though he was a starter for the Expos early in his career. He was a .230 hitter who hit 57 home runs and drove in 230 RBI for his career. 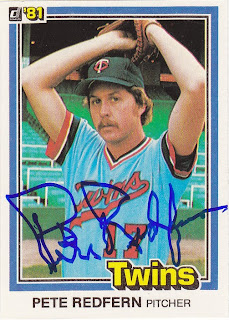 Here is an interesting through the mail return that I got. As soon as I opened up the letter and looked at the signature on the card, I got online to find out more about Pete Redfern.

It turns out that Pete severely injured his neck in a diving accident in the early '80s. The accident officially ended his playing career and left him paralyzed. To this day, he is still wheelchair bound, yet an accommodating TTM replier.

Pete's Major League career lasted seven seasons and all were with the Twins. He was mostly a starter and posted a career record of 42-48 with 3 saves and a 4.54 ERA. His best season was probably the 1979 season. That was the one season where he pitched primarily out of the bullpen and he responded with career-bests in ERA (3.49), strikeouts (85), and winning percentage (.700). I wonder why the club bothered to move him back to the starting rotation after that season. Maybe they did not want their former number one overall pick to be pitching out of the 'pen.

It took Pete just eighteen days to get this card back to me.

Most of the time, I send out the cards from this set without knowing a single thing about the subject pictured on the card. It is returns like this that make me truly appreciate the time and effort that the guys go through to help out us autograph collectors. 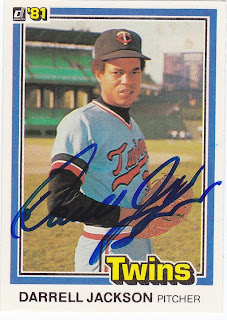 This is the Darrell Jackson card that I got signed through the mail last November. It took just ten days to get this card back.

I am not sure what is going on with Darrell's last name in his signature, but it is definitely unique. 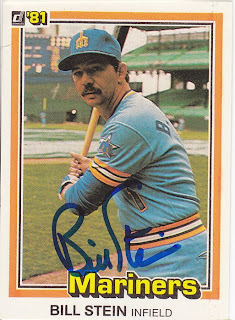 Here is the second of two cards that Bill signed for me through the mail last year. The first card was his '77 Topps card and that card was posted in January. It can be seen here. It took just five days to get these two cards back.

As I mentioned in the first Bill Stein post, he was an original Mariner. He was their primary third baseman over the first two years of the franchise's existence before he started battling some injury problems. After the 1980 season, Bill was granted free agency and ended up signing with the Rangers. He spent five seasons with Texas as their utility man before hanging them up. 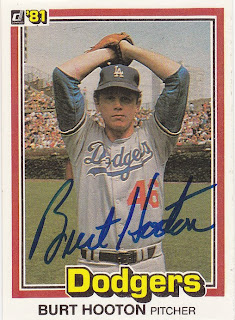 This is the Burt Hooton card that I was able to get signed through the mail. I sent this one to Burt last October and I got it back in eleven days.

I had tried to get this card signed by Burt at a couple of minor league games without any success. He is the Astros AAA pitching coach and I failed to get this card signed by him in Round Rock in 2008 and Oklahoma City in 2012. In both cities, he flat out ignored anyone that tried to ask him to sign. In Round Rock, which has one of the best setups for autographs, he actually jumped a couple of fences to avoid the area where the 'graphers were.

I guess he is just one of those guys who are strictly business at the ballpark. But at home, he is a willing signer through the mail. On SCN, he has a 92% rating with almost 300 successes coming from him. So, while he is tough to get at the park, he is not a hard autograph to acquire. 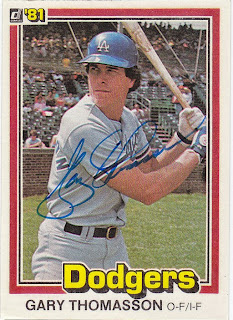 Here is the Gary Thomasson card that I got signed through the mail in February. It took one month for this one to make it back home.

Gary played in the big leagues for nine seasons and saw time with the Giants, A's, Yankees, and Dodgers. He played all three outfield positions, as well as first base, during his career. He was a .249 hitter with 61 home runs and 294 RBI.

When I first saw this card, I assumed that Gary was a catcher based on his flapless batting helmet. Whenever I see one of those, I always think of catchers. 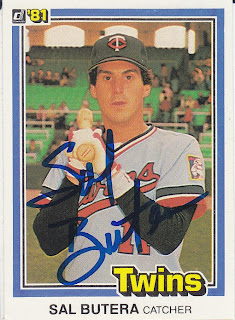 Next up is the Sal Butera card that was signed through the mail. I sent this card to Sal in January and I had it back thirteen days later.

Sal played in the Majors for parts of nine seasons with the Twins, Tigers, Expos, Reds, and Blue Jays. He was mainly a back-up catcher who never played in more than 67 games in any season. His best season was probably with the Twins in the strike-shortened 1981 season. He saw the most at-bats that year and he hit .240 with career highs in hits (40), doubles (7), RBI (18), and walks (22).

For his career, Sal was a .227 hitter with 8 home runs and 76 RBI. Though he made his Major League debut in 1980, he would not hit his first Major League home run until 1985. He went on to hit three of his eight that season.

Sal had the privilege of pitching in two games during his career. He racked up two scoreless innings with no hits, a walk, and a strikeout. The one strikeout belonged to the Cubbies Chico Walker.

Sal's son, Drew, saw a few games with the Dodgers this past season.