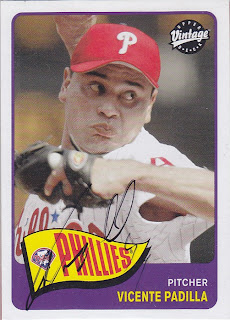 Believe it or not, this card is actually signed by Vicente Padilla. See those scribbles over the Phillies pennant? That is Vicente's hurried ballpark signature.

I got this card signed by him at a Royals game in 2008 while he was still with the Rangers. It was a day game early in the summer, so niether team took batting practice. Luckily, most of the pitchers were out in the feild getting there work in, so I was able to get a few cards signed.

I really didn't think I would get this card signed since Vicente pitched the night before and he looked pretty tired after his running. But, when the pitchers started to head to the clubhouse, some kid asked him to sign and he did. Unfortunately, I was getting 'graphs from CJ Wilson and Robinson Tejeda at the time and I thought I missed my window of opportunity. But, I asked him to sign as he walked by me and he came over and signed my cards. I don't see why Nick Swisher had a problem with him. He seemed like a nice enough guy to me.

Now, if we could only do something about his signature.
at 2:20 PM

I never got his sig while he was with the Rangers. That's a rough one!