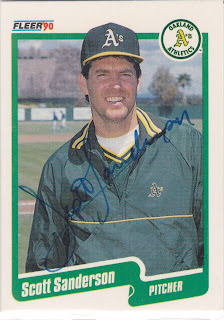 Last month, I got a package from the ladies at Dinged Corners and this was one of the autographs that was included.

Scott Sanderson had a career that spanned 19 seasons. He was mostly a starter and he finished his career with a 163-143 record and a 3.84 ERA. The most games that he ever won in a season was 17 in 1990. In 1991, he made his only All-Star team as a Yankee. Unfortunately, he did not pitch in that game. He was a lousy hitter (.097) but he had two homers and the first one was a grand slam.

2002 was Scott's first year of eligibilty for the Hall of Fame. He didn't recieve a single vote.

This is the only card that I have from the update set that year, so it is always cool to have something that didn't come in packs. For some reason, the signature is kind of hard to make out on that green jacket. I would have thought that blue would work just fine. I guess I would have been wrong.

I have no idea how this autograph was obtained, but I would guess that it was through the mail. Thank you, Patricia and Lucy, for this great card!
at 10:32 PM