I recently won a contest put on by Sports Locker. The prize was some Howard Johnson cards. While I am not a big HoJo fan, I could not pass up the challenge of answering the three questions that it was going to take to win the contest.

The first one was: What team first hired HoJo as a coach in their minor league system? I didn't read the question too well and answer the Butte Copper Kings (TB). Apparently the TB in parenthesis was good enough. I got the answer from Wikipedia.

The second question was: Is Howard Johnson 1st, 3rd, or 5th on the Mets all-time home run list? He is third. I didn't see the answer on Wikipedia (although I noticed it on there later) and ended up going to Baseball-Reference.com to find the answer.

The final question was: Where does Howard Johnson's son play his college baseball? He plays at Jacksonville University. That was by far the hardest question of the three. Wikipedia listed his son's first name (Glen) and my first Google search didn't turn up much (apparently Glen Johnson is also the name of a professional soccer player). I then refined my search a bit by adding when he was drafted by the Mets and I eventually found the JU informaton.

So, it was a fun and challenging little contest. Here is what I won. Nine different HoJo cards (there was a duplicate of the Pinnacle card) and a random Ozzie Smith card. I'm lazy and didn't feel like taking the cards out of their top-loaders, so part of them didn't fit on my scanner. 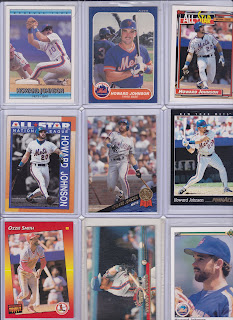 The random Ozzie card is cool because he will be coaching the USA squad in the Futures Game in two weeks. I will be attending that game and that is one less card I have to look for before I head to St. Louis. Speaking of Ozzie, if anyone has an extra '81 Donruss card of him, let me know. I don't have it and I would like to try to get one signed while I am in St. Louis.

I've got that Ozzie Smith. I can send it to you.

I would certainly appreciate that. If I don't get it signed, I will send it back.

On a side note, how did you get a nice big header at the top of you blog? I have been trying to add one all night without much luck. What am I doing wrong?

I just fooled around with MS Paint. I experimented with different sizes of letters over the top of the cards I have featured until I was happy with the size. It was just a matter of tinkering with the point size of the letters.

It took some time before I was happy with it. But, really, if I can do it, anyone can.

Oh, maybe you were talking about the whole thing and not just the letters.

I don't know. I just scanned in the cards how I wanted them, then fiddled with the background and the blog title and it showed up that size. I'm no expert, that's for sure.

Thanks for the shout-out. Glad you liked the cards and the Ozzie Smith bonus! I had tons of those Pinnacle cards for some reason.

Congratulations on your contest win. Good luck with Ozzie Smith - he seems like a cool guy.

Yeah, I met him at the CWS a couple of years ago and he was really nice. However, I wasn't prepared for that one and had nothing for him to sign, so I had to get one of the 8x10s that AT&T supplied.