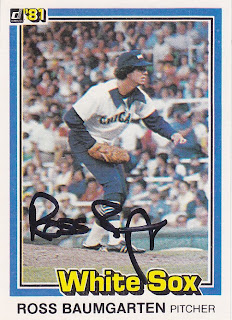 Here is another White Sox player from the '81 Donruss set. I think half of my fascination with this set has to do with all of the White Sox cards. A majority of the photos were taken in Chicago, so there are plenty of White Sox cards to go around. And the best part about the 1980 White Sox were those stupendous uniforms. From the white socks to the collared jersey, the uniform was one of a kind and I just cannot get enough cards of them.

Ross pitched in the Majors for parts of five seasons, spending four of them with the White Sox and one with the Pirates. His best season came in 1979 when he went 13-8 with 72 strikeouts and a 3.54 ERA, finishing fourth in the American League Rookie of the Year vote. Unfortunately, he followed up that season with a 2-12 record in 1980. His ERA and WHIP was lower that season than the previous season, so he must have had some bad luck and no run support.

Ross finished his career 22-36 with 6 shutouts and 10 complete games. His last ten decisions were all losses.

I sent this card to Ross in November and had it back two and a half weeks later.

Ross has an interesting signature. His long last name is severely shortened while his first name is basically printed. 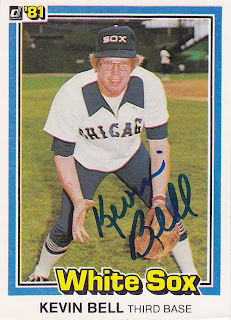 Next up is the former White Sox and A's player, Kevin Bell. It is hard to tell by the photo, but Kevin was once a first round draft pick. Who would have thought? Even more surprising is that he was drafted in the first round out of a junior college. Bryce Harper aside, how often does that happen?

Kevin was never able to live up to the first round hype (was there even first round hype in the '70s?). He had a decent rookie season with the Sox in 1976 when he hit .248 with 5 home runs and 20 RBI as the everyday third sacker for the second half of the season. Even more impressive than the 5 dingers was that he legged out 6 triples, as well. Unfortunately, those 230 at-bats that season were the most that he was ever going to see as a Major Leaguer. He got into more games in 1979 and 1980, but he never got more than 200 at-bats. He also never topped that .248 average as he finished his career a .222 hitter.

Kevin finished his Major League career in 1982 by playing in four games with the A's and going 1-9.

I sent this card to Kevin in November and I had it back ten days later. 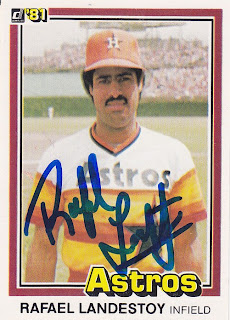 Sorry about the lack of posts lately. I made an excursion to Arizona for Spring Training last week and I spent the two weeks prior to that just trying to get cards ready. We were planning on seeing eight teams in three days and it was an incredible task to get cards ready for that many teams sporting forty man rosters. But, I did OK as I came home with about sixty-five new autographs. I thought I did really well until I saw that Ryan, from the Great Orioles Autograph Project, came home with nearly 300 autographs from his three day trip. Nice job, Ryan!

I was lucky enough to have this card show up in my mailbox today. I sent this card out to Rafael two months ago. It has been one of my longer waits of late, but there are still two cards out that I sent on the same day.

Rafael played in the Bigs for parts of eight seasons with the Dodgers, Astros, and Reds. He was a utility man that played all four infield spots and a little bit of outfield, too. He was a career .237 hitter that tallied four home runs in his career. One of his four dingers came off of Hall of Fame pitcher Steve Carlton. 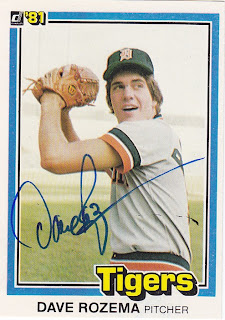 Here is the first '81 Donruss card, in the long line of '81 Donruss cards to come, that is of a player whose autograph I have not yet posted. This one features the former Tiger and Ranger, Dave Rozema.

Dave pitched for the Tigers for eight seasons as a starter and a reliever before finishing his final two seasons with Texas. His best season was his rookie campaign in 1977 when he went 15-7, with a 3.09 ERA and 92 strikeouts. He finished his career with a 60-53 record with 17 saves and a 3.47 ERA.

According to Dave's wikipedia page, he was selected as one of the "10 Greatest Characters in Detroit Tigers History" by Sports Illustrated in 2006. He was picked because he came off the bench for a brawl in 1982 and tried to deliver a flying karate kick, only to miss and tear eight ligaments in his knee and miss the remainder of the season. He also needed stitches that season after falling down on a flask that was in his back pocket. Other reasons he was chosen include shoving a beer glass into Alan Trammel's face that resulted in 47 stitches, washing his car with a Brillo pad, and missing a team bus because he overslept after judging a wet t-shirt contest. Seems like a colorful guy.

I sent this card to Dave at the beginning of November and I had it back about two weeks later. 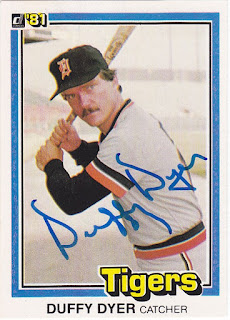 In order to get through the massive amount on '81 Donruss cards that I have to post on here, a few of the posts are going to be really quick and to the point. This is one of those posts.

In case you missed it, I posted a '72 Topps card of Duffy back in September and it can be seen here. That card and this one were both signed in the same TTM request.

Is it just me, or did the Tigers have a bigger logo on their hats in the early '80s? 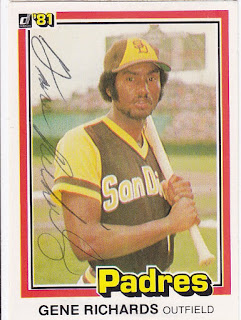 I went a little TTM crazy on this set over the past six months and here is the first of many that I obtained that way. I sent this card to Gene in November and I got it back about three weeks later.

This is the second card of Gene that I have posted on here. I posted the first one about four years ago and it was one that was sent to me from Rod, of Padrographs. After comparing the signatures on the two cards, it would appear that they do not match each other. The first letter of his last name is quite different and the last two letters of his last name look nothing alike. The only real similarities between the two is the way the signatures slant to the right and the first letter of his first name look similar, but not identical. I got another card signed by him, so I will check that out when I get to posting it. It was obtained in the same TTM request as this card, so it will probably look a lot like this one. But, you never know. 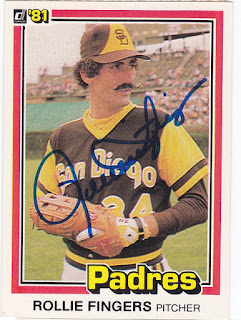 Finally, I have gotten to my '81 Donruss cards. In case you missed it, I hit my goal of 100 signed cards from the set back in September when Rick Cerone signed for me TTM. I haven't posted 100 cards from the set yet, but don't worry. Not only have I got 100 cards signed from the set, but I also am about halfway through the next 100. So, expect to be seeing a bunch of these cards from here on out. Some of the posts will be more in-depth than others while some will be really quick just to get them out of the way.

So, here is my fourth Rollie Fingers card that I have posted on here. Like the last card of him, this card was signed at All Star Fanfest last summer. I have had this card in my collection since I got hooked on this set, but I did not get it signed at my first encounter with Rollie as I did not realize he was going to appear there.

Rollie had a career year with the Padres in 1978 when he had a career high 37 saves. But, his best season came with the Brewers in 1981 when he won the National League Cy Young Award and the MVP by going 6-3 with 28 saves and a phenomenal ERA of 1.04.

And yes, I am trying to update the layout of my blog.  It has been a few years since I have done this and I am not 100% happy with it so far.  One thing I want to do is expand the header to make it wider.  Any suggestions?
at 1:28 AM 2 comments: