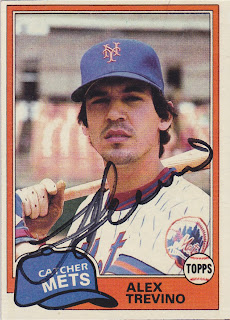 Here is another card that I got signed at Astros Fanfest. That is cool that Alex and the Astros still partner up for these events since he only spent two and a half seasons in Houston, as a backup, before being released midseason in 1990. Prior to all of that, he had spent some time with the Mets (obviuosly), Reds, Braves, Giants, and Dodgers. After getting released by the Astros, he played in nine games for the Mets and seven games with the Reds to finish out the 1990 season and his career.
at 4:35 PM

Alex doesn't really look too happy on that card, does he?

He doesn't look happy, but I'm not even sure what he looks like. Confused? Spaced out? Scornful?

My enduring memory of Alex Trevino was his homer on a Saturday Game of the Week in the late 80's off Fernando Valenzuela that finally convinced the Dodgers that something was wrong with Fernando and he was pretty well done.