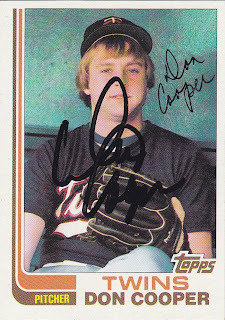 I got this card signed this past Tuesday after the Royals/White Sox game. Don is the Sox pitching coach and he signed it for me on the way to the security checkpoint by the team bus.

I'm not sure if all or any of the teams do this, but the Royals and KCI airport have an interesting setup for visiting players on getaway days. When the players leave the ballpark and get to the buses, they basically go through security like they would in an airport. They get checked with the handheld metal detectors and I think their bags get inspected (I didn't pay too much attention to that part). Then they get on the bus and the bus drops them off at their plane. So, they still go through the same checks that the average passenger would go through, but it only involves the team.

Then one downfall to trying to get autographs from players on their way to the bus is that all of the players and coaches are wearing suits and most of them do not want to stand out in the heat signing autographs (also, some of the players have a bag in one hand and what appears to be a large mixed drink in the other). Don signed my one card and then proceeded to he checkpoint without signing for anyone else. I had one more coach sign for me and another guy and Octavio Dotel signed for a couple of people, but I skipped out on him because Grienke was coming out. Zack was in jeans and a polo and signed for everyone. That is how I was able to get my two SIs signed.

Anyway, Don Cooper had a short career in the Majors. After a decent rookie season in 1981, he only made it into 17 more games over the next four years. This card and an '82 Fleer card are the only main cards made of him. This card isn't the best looking for getting signed, but it is all that I had. Also, I wasn't expecting him to sign since no one else was. When he actually came over, I didn't have time to get my blue Sharpie out. It might have looked a little better, but I'm not too disappointed in how this one turned out. I thought it would look much worse.
at 4:41 PM