I went to the card shop today to get some sheets and was shocked to see that the new UD O-Pee-Chee cards were out. I really like the look of them and they are going to be great for getting autogrpahs. Plus, they were cheap ($1.50 a pack). The only downside was that there are only six cards per pack. But it's a 600 card set and there seems to be a good assortment of players. For instance, I got a card of Russ Springer. I didn't even know Russ was still playing because I haven't pulled a card of him in a while.

To me, the cards have a 2003 Upper Deck Vintage feel. The border doesn't resemble that set at all, but the mulittude of posed shots and close-ups do. The inclusion of the League Leader cards help the effect, too.

Each pack includes one black border card. They are the UD version of a Topps gold card. A better description may be the grey bordered cards in the 2004 Topps Total set.

Here is an almost random selection of nine cards. 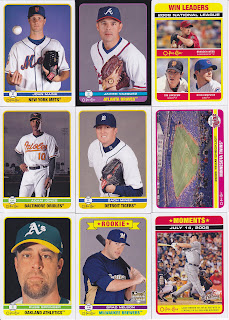 The card shop owner said that there wasn't very many inserts in the set, but I ended up getting two. I also got a 20th Anniversery Retrospective card of the Mars Rover, so you are now warned that those found their way into the packs. The two real inserts I got were a Carl Crawford Midsummer Memories (MM11) and a Pudge/Posada/Veritek jersey card called OPC Materials (OPC-RPV). At least I am hoping they are jerseys. All it says on the back is that they are "Game-Used baseball memorabilia". 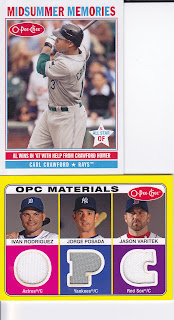 So, there is my OPC preview. I have no idea about short prints or anything like that. Assuming that there isn't any, this may actually be a fun set to put together.
at 8:27 PM

You're the first person I've found who's had a positive impression of the O-Pee-Chee cards.

My feelings hinge on the price... at $1.50, I can almost justify the six card packs. Any higher, they'd feel like too much of a rip-off.

The regular cards are okay but I like the checklists.