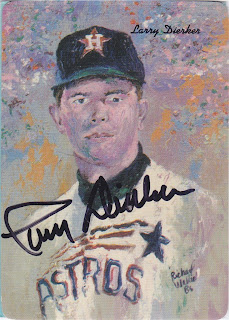 While I was at the card show at fanfest, I just happened to find this card in the same box that had the Jimmy Wynn. Since I only had two cards of Larry, I picked this one up also. I figured that I would deffinitely be able to get the Wynn card signed and I would try to get this card signed if Larry would sign more than one. Of course, Larry is a nice guy and signed both of the cards that I had of him.

Since I was down in Houston for my cousin's wedding (no, I didn't go there just for fanfest), my Dad went to fanfest with me. So, when going through the autograph lines, I gave him the one card that I wanted signed the most and I had two other cards in my book. With the exception of Enos Cabell and John Hudek, I only got two cards signed by each player. My dad got the third one.

Speaking of my Dad, when he saw these Mother's Cookies cards after I bought them, he said "you know these are fake, don't you". I told him that they look real to me. I think that he was just referring to them not being made by one of the main brands.
at 8:44 PM

C'mon...admit it: Fanfest was your #1 priority.

At least you were able to find a card for Dierker to sign. I've met him twice and never had a card to present to him. I finally had to send some cards through the mail before getting one with ink on it.

Actually, Tom, you are probably right. When I found that they were having fanfest that same weekend, it became my #1 priority. I spent more time at Minute Maid in those two days than I did with my family.

Yep, that's what I thought. I did something similar: the day after I returned from a honeymoon trip to Mexico I left my new bride at home so I could attend a signing in Plano, TX. I was sick, she wasn't too thrilled, but you gotta do what ya gotta do!