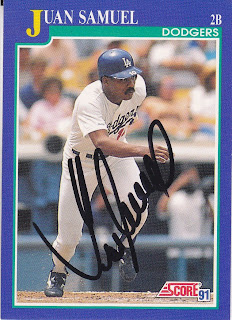 When I was heading over to the suites, one of the ushers told me "oh, it's just a coach". I wanted to tell her that that coach just happened to be Juan freaking Samuel, the guy that stole 72 bases as a rookie in 1984. But, I didn't.

Juan only signed one of my three cards. I took an '88 Topps All-Star card of him that I thought would have looked really nice signed. But he only signed the card in the middle and that was this one. It's still a good looking card though.

You might have noticed that my usual, lame-looking header at the top has been replaced by an even lamer-looking header. I made a new one last night and for some reason, it looks really small when I attach it to here. I have no idea why it is like that and I was hoping someone might have some suggestions for me.
at 10:25 PM

I'm not sure how you are doing your header, but this is what I did (I might not have explained it in full detail in my comment on my blog):

Again, that's what I did for mine and and the picture was not resized; I'm not sure if that's what you need to do for yours. Try that and see if it works.

I'm not the biggest Juan Samuel fan (he wasn't very good during his time with the Mets), but he's not "just a coach."

Thanks Tom. I tried all of that and it does the same thing each time. I'm just going to have to resize or make it less pixels or something.

Paul- I'm glad that you agree with me. Some ushers are niave about that stuff while other like to check out what you just got signed.