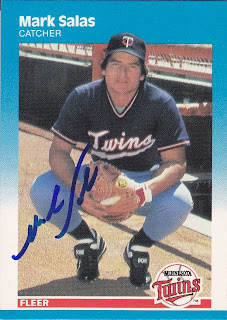 Well, it's Saturday (I hope) and I wrote this post Thursday night. Last night I was at the Reds/Royals game in KC and hopefully it wasn't rained out. Today, I'm going to the opening game of the College World Series. After the game, I'm driving to Des Moines to see the Omaha Royals play the Iowa Cubs. I'm hoping that I get there early enough to get a ton of autographs. Then tomorrow, it's back to the College World Series for a day game there. After the game, I'll be heading back home. So, I should have a post or two up tomorrow night.

Anyway, on to this card. I got this card signed two weeks ago after seeing the White Sox beat the Royals. Mark is a coach for the Sox and was nice enough to sign a couple of cards for me while on the way to the team bus. It was pretty funny when I asked for his autograph. He said "c'mon, I've got a suit on and it's ninety degrees out here". He then came over to sign and I told him it was a good looking suit and he said "yeah, right". He was pretty cool.
at 3:00 PM

Hope you're having a fun trip!