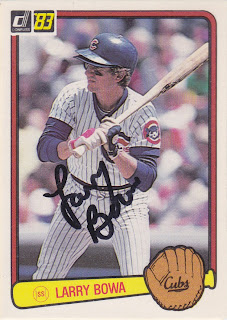 Here is the third and final card that I got from Larry this past March. I sent him a couple of Phillies cards and I thought about sending a card to him from when he was a manager. But, the only manager card of him that I could find was one with the Phillies. I didn't want to send him three Phillies cards, so I threw in this Cubs card. As you probably know, Larry was part of the worst trade in Phillies history when the Phils sent him and some kid named Sandberg to the Cubs for Ivan DeJesus.

I don't remember Larry from his playing days; I was pretty young at the end of his career. But I do remember him as the Phillies manager and it always seemed like he was a hard-ass. So, I was kind of surprised to find that he is such a great through the mail signer. That just goes to show how some guys are a completely different person off the diamond, or that I don't know what I'm talking about.
at 9:11 PM

Those stories are always fun. I will never forget the first autographed card that I ever had- an '87 Fleer Update from Danny Tartabull.