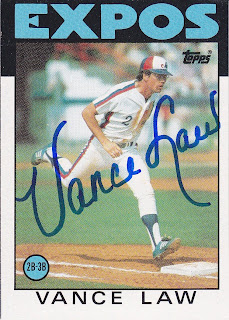 Here is the second card that I was able to get signed last month when I went to a Kansas State game while they were taking on Vance's BYU team. Before the game started, I was able to intercept Vance on his way from the bullpen to the dugout. I asked if he would sign and he came over to the fence and started signing for me. We exchanged the usual greetings of "how are you doing" and what not. While he was signing, I asked him if he was enjoying coaching his kids (he has two sons on the team). He said "you bet; some people think that they are only here because of me, but they don't understand that they are good ballplayers, good students, and good people and they deserve to be here just as much as anybody". Wow! I was not expecting that answer. But, I thought that it was very interesting since he isn't afraid to let some stranger know how other people percieve his kids being on the team. I didn't even know what to say after that. I think I said "that's great" or something.
at 9:01 PM

You are right-on about that one Dave. I'll get into that more next week when I post his third card.

I always liked Vance Law when he was with the Cubs. Nice card!