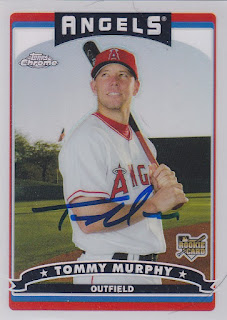 Here is the third and final Tommy Murphy card that I got signed in Des Moines, Iowa in 2009. Tommy was playing with the Omaha Royals at the time and he signed this card for me between games of a double header. You can see the first Tommy Murphy card here and the second one here.

In general, I really am not a huge fan of chrome cards. They seem to either cost more than the base cards or are the same price with fewer cards in the pack. Because of that, I tend to stay away from them. But, I picked up this card from checkoutmycards and I could not be happier with the results. The signature really pops off of this card.

Sorry this was such a short post. But, on a positive note, this is my fifth straight day of posting. I guess that is better than nothing.
at 9:25 PM 2 comments: 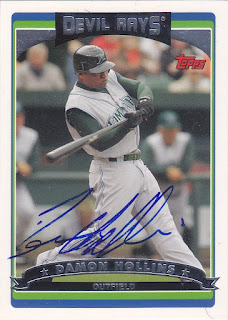 This card right here is the first baseball card that I got signed at a ballpark. Before that, all of my autographed cards were obtained TTM, at card shows, or in packs. I had some signatures from ballparks before, but most of them were on baseballs. That all changed in 2008 when my buddy and I made our first ballpark trip west. It was such a long journey just to get to the west coast that we had to stop at some minor league parks just to break up the drive times. The first park we stopped at on that trip was Isotopes Park in Albuquerque, New Mexico and that is where I got this card signed. Damon was playing for the Omaha Royals at the time and I was able to get this card signed after the O-Royals got done with fielding practice.

Damon was really nice and he was signing everything for everybody. One guy handed him a stack of about a dozen cards and Damon signed each and every one of them with a smile. I only got this card signed because I didn't think I had a card of Damon. So, I purchased this card off of ebay for a penny and overpaid for shipping just so I had a card to get signed (back when you could buy stuff for a penny on ebay and before I knew about checkoutmycards). Unfortunately, about a year later, I was going through an old minor league baseball card album and found two or three minor league cards of Damon that I could have took with me to get signed. This was also before I knew about the Beckett website. But, that is OK. Tampa Bay is the only team that Damon saw any significant Major League time with, so I am glad that I have a signed Devil Rays card of him.

Damon was drafted by the Braves in the fourth round of the 1992 draft and he was a top-100 prospect for the Braves prior to the 1995 and 1996 seasons. He made his Major League debut with the Braves in 1998, but was traded to the Dodgers after only playing in three games. He played in five more games with the Dodgers that season before being released. After his release, it was back to the minors for Damon and he would stay there until he got called back up to the Braves in 2004. Then, in 2005, he stuck on with the Devil Rays and played in 120 games that year and 121 the following year. He only hit .239 as a Ray, but he did club 28 home runs over the two seasons while driving in 79. He then spent all of 2008 with Omaha and retired after the season.
at 11:57 AM 2 comments: 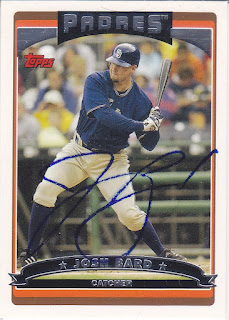 Here is another card in the long line of Padrographs sent to me by Rod. This one features back-up catcher Josh Bard.

Josh was drafted by the Rockies in the third round of the 1999 draft out of Texas Tech. He played in the Rox organization for only one season before being dealt to Cleveland in 2001. With the Indians organization, he rose up the ranks quickly and made his Major League debut with the Tribe late in the 2002 season. That year, he played in 24 games and hit .222 with 3 home runs. He would bounce back and forth between the minors and the big league club over the next couple of seasons before solidifying himself as the Indians back-up catcher in 2005.

That job was short-lived, however, as the Tribe traded Bard to the Red Sox after the season in the Coco Crisp/Andy Marte trade. Josh's tenure in Boston was extremely short as they then traded him to San Diego after only appearing in seven games with the Sox. He saw much more action with the Padres, though, as he had career highs in games played and at-bats with the Friars in 2007. He even hit a robust .338 in his first season with the club, which is about eighty points higher than his career average.

Josh spent 2009 with the Nationals and then split the last two seasons between Seattle and their AAA team in Tacoma. He signed a minor league deal with the Dodgers before this season started, but his Major League Baseball page lists him as released. The Dodgers AAA team's website still lists him as an active member of their club, so I am not really sure what is going on there.

Josh's signature is much better than yesterday's Padrograph of Russell Branyan. But, it really is no more than a "J" and a "B" with a little line to make up what I am assuming is part of the last letter in his name.
at 8:31 PM 1 comment: 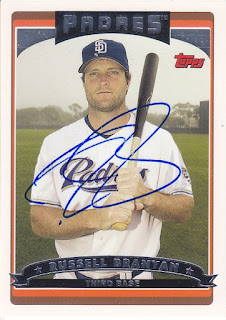 Here is a Padrograph of Russell Branyan that was sent to me by Rod a few years back. In case you have forgotten what a Padrograph is, it is a term that Rod coined for his Padre autograph collection. He's got a seemingly unlimited supply of them and every once in a while he will send some extras my way. This one happened to come from the initial lot that he sent me which included more than 150 Padrographs. Like I said, he has a bunch!

Russell has had a long and journeyed career in the Majors. He broke into the league with the Indians in 1998 and, as best as I can tell, he is still playing although he is currently rehabbing from a herniated disc. During his career, he has played for the Indians, Reds, Brewers, Devil Rays, Padres, Phillies, Cardinals, Mariners, Diamondbacks, Angels, and he is currently signed to a minor league deal with the Yankees. He has 194 career home runs and a .232 batting average. His best season came with the M's in 2009 when he had a career-high 31 homers and 76 RBI.

Russell's signature doesn't do much for me. But, by all accounts, this is a fairly standard signature from him.
at 11:19 AM 1 comment: 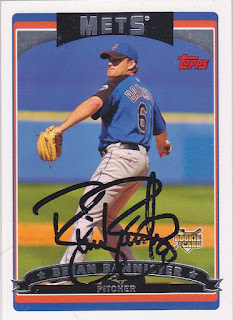 Here is the card that almost killed off this blog.

Back in January, I was posting fairly regularly. I wasn't posting daily like I used to, but I was pumping out two to four posts a week. I had a lot going on in my life at the time and still do, so this blog wasn't a top priority. But, I was still finding time to get some posts in whenever I could. Then it was time to post this card.

I cropped the scan of this card, started a new post, and then I could not think of anything to write. I said screw it and started over the next day and the exact same thing happened. I did the same thing the following day and then ended up going a whole month without posting on here.

I guess the main reason for my writers block was because I had posted a card of Brian about a month and a half earlier. In that post, I commented on how Brian was always a great signer when he was with the Royals and that he has one of the nicest and most consistant signatures in baseball. And for some reason, that was all I really had to say about Brian. Never mind the fact that this is only the second Brian Bannister card that I have posted and I still probably have another half dozen or so cards of him as a Royal. But, I will get to them as they come.

In my last Bannister post, I commented how Brian left Japan after last year's earthquake and tsunami. I figured that he must have been a free agent. But, according to Wikipedia, Brian has retired from baseball and is now running a photography studio in Phoenix. I didn't see that one coming.

As for me, I am doing well. I have moved towns and am living with my girlfriend and her son and I could not be happier. I have been to two Royals games so far (both obviously losses) and I got twenty-six cards signed between the two games.