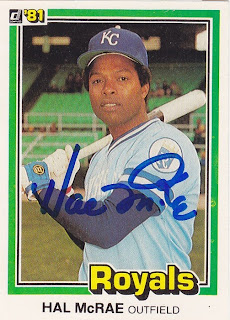 Here is a card of Hal McRae that I got signed at All Star Game Fanfest last summer. Hal was slotted in the last signing of the four day event and that was the day of the All Star Game. Since my dad went with me to Fanfest, I had been able to get two autographs from each individual thanks to my dad's help. But, at that time, Freddie Patek was also signing at the other end of the convention center. Since we needed to get going to head out to the game, we split up and I got Hal and my dad got Freddie. I needed both of them for this project. But, more importantly, both guys are Royals Hall of Famers and I did not have a single autograph from either of them.

Hal played in the Majors for nineteen seasons, spending all but four with the Royals. He played a little bit of outfield, but spent the majority of the time as the Royals designated hitter. He was a three-time All Star and won the Outstanding Designated Hitter Award (now called the Edgar Martinez Award) three times. His best season came in 1982 when he hit .308 with 46 doubles, 27 home runs, and 133 RBI. The 133 RBI lead the league and was the club record until broken by Mike Sweeney in 2000.

Like Larry Gura, Hal is in the top ten for many Royals all-time lists and single season records. He still holds the mark for doubles in a season (55) and is second on the all-time board for RBI and extra base hits. Some guy named George seems to be number one on most of those club records.

Hal was elected into the Royals Hall of Fame in 1989. 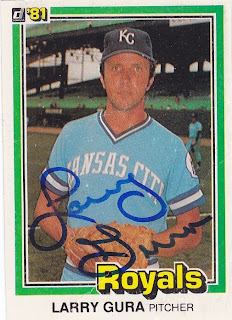 This is the second Larry Gura card that I got signed through the mail last November. I posted the first one some time ago and it was a Topps Million Card Giveaway that kept getting returned to sender every time I sent it to him. Then, of course, when my attempt finally does come through for me, the cards make it back with creases in them.

Larry pitched for the Royals for ten seasons. He won 10 or more games seven straight years with the club and reached 18 wins twice. He was an All Star for them in 1980 and that was probably the best season of his career. He finished that season 18-10 with a 2.95 ERA and 113 strikeouts, the only season that he struck out 100 or more batters.

Royals.com named the trade that acquired Gura from the Yankees the best in-season trade ever made by the club. They gave up Fran Healy for him and Fran played just three seasons for the Yanks. 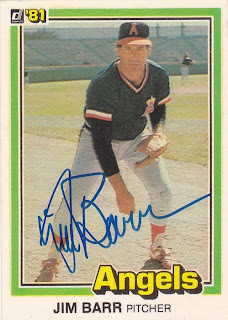 Here is the card of Jim Barr that I got signed through the mail last November. It took just ten days to get this card back from Jim.

Jim made some history during his first full season in 1972. That year, over two starts, Jim set the record for most consecutive batters retired when he sat down 41 straight batters. That record stood thirty-five years before being tied by Bobby Jenks in 2007 and then broken by Mark Buehrle in 2009. 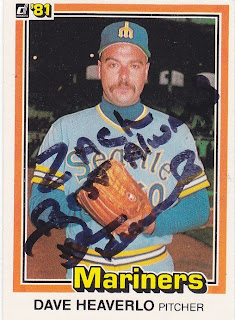 I have passed the 400 card barrier, so I must be about two-thirds of the way done with posting cards from this set. I love this set and all, but I am ready to move on to some other stuff, like some cards from 2007. But, that is still a ways off.

This is the Dave Heaverlo card that I got signed through the mail in January. It took just over two weeks to get this card back. Dave was even nice enough to personalize it for me and he even spelled my name right.

Dave's big league career lasted seven seasons with the Giants, A's, and Mariners. He pitched his entire career out of the bullpen and racked up 26 saves in the process. His best season came with the A's in 1978. His career-high 130 innings pitched helped him have career highs in saves (10) and strikeouts (71) while posting a respectable 3.25 ERA. 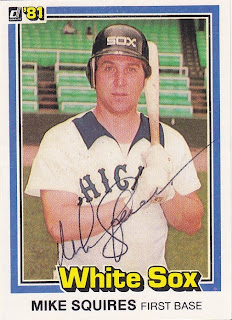 Here is the card of Mike Squires that I got signed through the mail in December. It took just eight days to get this card back from Mike's home in Michigan.

Mike played his entire ten-year career with the White Sox. He mainly played first base and he was a fairly light hitter for that position. He never had more than two home runs in any given season and his season high for RBI was 33 in 1980. Mike saw the most action of his career in that 1980 season and put up his best offensive numbers in his career, including a .283 batting average.

For his career, Mike was a .260 hitter with 6 home runs. He even finished his career with more walks than strikeouts and he won an American League Gold Glove award in 1981. 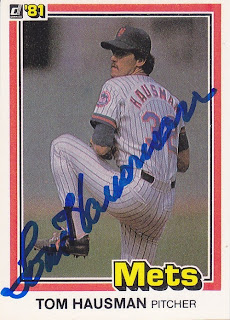 Next up is the Tom Hausman card that I got signed through the mail. I sent this card to Tom in January and I had it back eight days later.

Tom pitched in the big leagues for parts of seven seasons. He mainly played for the Mets, though he did pitch in a handful of games with the Brewers and three games for the Braves. He was mostly used out of the bullpen, but he did start a few games in the first half of his career.

This is one of the few action shots from this set that was not taken in Chicago. 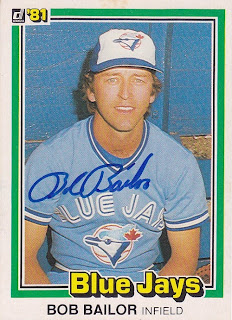 Here is a card that I didn't get signed through the mail or in-person. I actually bought this card. I found this card at the card show at Royals Fanfest this past winter in a stack of autographed cards. Most of the autos were from guys that were good TTMers, like Virgil Trucks, Bobby Shanks, and Al Rosen, so I figured that this autograph was probably obtained that way.

This card set me back two bucks. But, since I did not have the card in my collection, I figured it would have taken me at least two dollars to buy the card, have it shipped, and then slap two stamps on it to have it signed through the mail. Actually, I probably came out ahead by buying it already signed.

Bob played in the Majors for parts of eleven seasons with the Orioles, Blue Jays, Mets, and Dodgers. He was a utility player that played every position except first and catcher. He even pitched in three games for the Jays in 1980.

He was an original Blue Jay and saw most of his playing time with that franchise. He hit a career high .310 with 5 home runs in their inaugural season and saw even more playing time the following year. That was the season where he had the most at-bats in his career and that corresponded with highs in RBI (52), runs (74), and doubles (29). 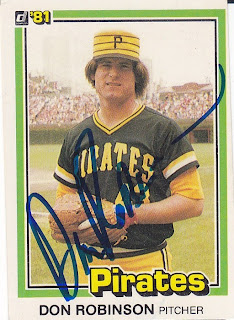 Next up is the Don Robinson card that was signed through the mail. This card was sent to Don in January and took only eleven days to make it back home.

Don pitched in the Major Leagues for fifteen seasons with the Pirates, Giants, Angels, and Phillies. He did the John Smoltz-thing by being a starter at the beginning and end of his career while relieving in the middle. He was 10 game winner five times in his career and had double digit saves three times. His best season was probably his rookie campaign with the Bucs in 1978. He was only twenty years old when he came up and he finished out the season 14-6 with a save, a 3.47 ERA, and 135 strikeouts. For his career, Don was 109-106 with 57 saves and a 3.79 ERA.

Don was also a good hitter, for a pitcher. He hit 13 home runs in his career, including a career high of 3 with the Giants in 1989. His exploits with the bat were good enough to land him three silver slugger awards. 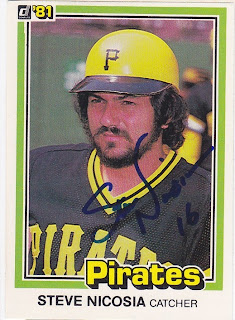 Nest up is the Steve Nicosia card that I got signed through the mail. I sent the card to Steve in January and I had it back about a month and a half later.

Steve played in the Majors for parts of eight seasons. A majority of that time was spent with Pittshurgh, but he also played with the Giants, Expos, and Blue Jays in his final years. Steve spent most of his time as a back-up catcher, though he did platoon for a couple of seasons early in his career. The most games he ever appeared in during a season was 70 and that came in 1979. He probably had his best season that year, too, as he hit .288 with career highs in doubles (16), home runs (4), and walks (23). 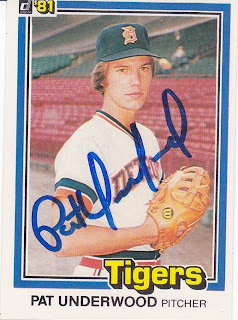 Here is the card of Pat Underwood that I got signed through the mail in January. I sent this card to Pat on the seventh and I had it back eighteen days later.

Pat pitched for the Tigers for parts of four seasons. He started and relieved, but most of his appearances came out of the bullpen. His best season came in 1980 when he had a career high in appearances and posted his best ERA of 3.59 while recording 5 saves. For his short career, Pat was 13-18 with 8 saves and a 4.43 ERA. 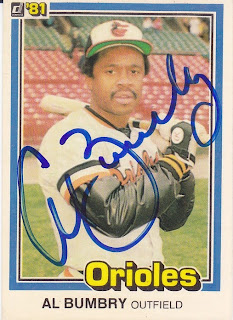 Back in April, I received a card package from Oriole super-autograph collector Ryan, from The Great Orioles Autograph Project. In it were some Royals cards and a myriad of autographed cards, including two cards from the '81 Donruss set. This is obviously one of those cards.

Al played in the Majors for fourteen years and all but one were with the O's. He was the 1973 American League Rookie of the Year when he hit for a career-high .337 and lead the league with 11 triples. He played in two World Series with Baltimore and made one All Star team. His All Star nod came in 1980 when he hit .318 with career-highs in home runs (9) and RBI (53).