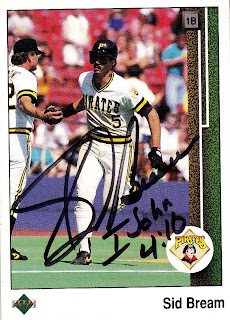 This is the third signed Sid Bream card that I have received this year. The first two, I got through the mail back in February. I was pretty disappointed in them because the signatures on the two cards looked faded. This is especially true with the '87 Topps card, which is unusual for a non-glossy card (here is the other card). A couple of days after the original post, I got a random comment from a first time commenter, Orioles Magic. He said that he and Sid were from the same hometown and that he had a ton of his autographs. He then offered me one of his extras. So, I took him up on his offer and less than a month later I had this great looking card.

Orioles Magic is the author of The Great Orioles Autograph Project. He seems to have started his blog about the same time that he left his comment on here. He is a great guy and recently got a card signed for me in person at a pre-game Orioles alumni signing. Hopefully, I will have another signature on it by the time I get through with the 1994 cards so I can show it on here. If you haven't checked out his blog, he is trying to get a card signed by every Orioles player ever. So, if you can help him out, I'm sure he will be able to work out a trade with you.

Plus, he sent me a great looking card. You'll have a hard time beating '89 Upper Deck. The second best thing about the card (right behind the autograph) is the photo. It looks like Sid just hit a homer and giving Gene Lamont five. Interestingly, twenty years later, Gene is still Jim Leyland's third base coach.
at 9:37 PM