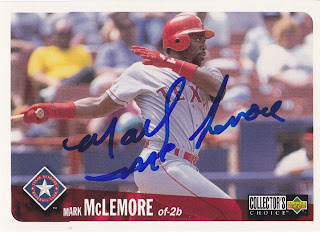 This is the third and final card that I got signed by Mark McLemore prior to the Rangers pre-game show this summer. You can see the first one here and the second one here.

Mark is one of the few players that signs his first name above his last name. That has got to be something that just comes from signing baseballs, bats, and cards for years. I wonder if it is strange for him to sign on a line anymore.

Mark's career lasted 19 seasons. During that time, he played for the Angels, Indians, Astros, Orioles, Rangers, Mariners, and A's. He was a career .259 hitter that could play just about anywhere. He spent most of his time and second base, but he also logged time at all three outfield positions as well as third base and shortstop.

Sweet Ranger goodness. We need to check out a game next season. Nice pickup on the Mac cards.

Going to a game would be fun. I will let you know next time I'm heading to the grandparents.