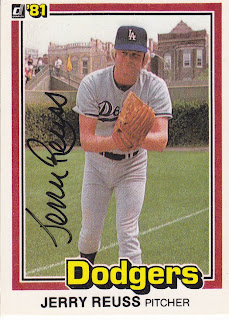 This is the second of two Jerry Reuss cards that I sent to him at the end of August. Here is the first one I posted. Compared to that one, this one looks more like I thought it would. Jerry looks like Jerry and Jerry didn't sign across his body.

Jerry had a long career, 22 seasons long to be exact. During that time, he was a two-time All Star, a three-time 18 game winner, and he won one World Series. He finished his career with 220 wins and 1,907 strikeouts. He even pitched for three teams in one season. That has to be worth something.

If this picture were taken today, you would see the rooftop bleachers and I think that the words "Eamus Catuli!" would be visible over Jerry's right shoulder.

Wait...where was the photo taken?