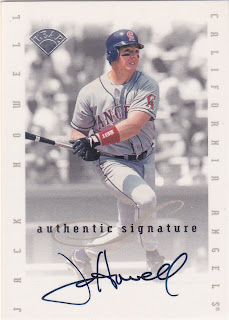 Here is the autograph that I got out of the other pack of this stuff that I bought. After these two autographs, I didn't even bother with the set any more.

When I got the two cards, I thought that the Jack Howell was the better player of the two. But, after looking at the career stats now, I'm not so sure about that. Both played every infield position and Jack also got some time in the outfield. Alex's batting average was .26 points higher (with almost 900 less at-bats) than Jack's. But, Jack had over five times as many home runs as Alex. OK, maybe they aren't the same type of player offensively. With the exception of average, Jack has much better offensive numbers.

So, maybe Jack is the better of the two. He was at least better known to me at the time since he had been around longer.
at 6:40 PM