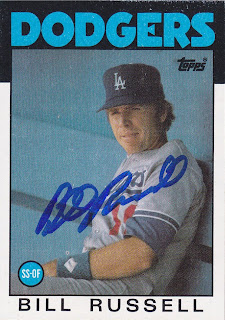 This is the third and final Bill Russell card that I got signed through the mail last month. You can see the first one here and the second one here.

When I send multiple cards to players or former players, I take the time to carefully choose which cards I send. I don't worry about the '81 Donruss cards, I just send those. Many times, when I send one of those cards out, it is the only card that I send becuase I want to make sure that I do get that card signed.

With Bill Russell, I sent along his '71 Topps card just because I had it sitting in a box and I wanted to put it to good use. I sent this card for a different reason. Sure, it was sitting in a box just like the '71 card. But, this one was different. I remember this card very well from my early days of collecting. The reaon why I remember it is because of the photo.

When I was a seven-year old in 1986, I was convinced that Bill looked just like Clint Eastwood.

I got a vintage card in the mail today and rather than waiting to wrap up the 1996 cards (which will begin tomorrow) before I show it off, I'll post it tonight after work. So, stay tuned.
at 2:49 PM