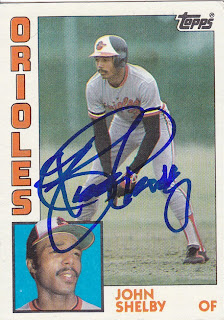 This is the third and final John Shelby autograph. Like the previous two, this one was obtained in Baltimore this past September while John was the O's first base coach. You can see the first one here and the second one here.

John told me an interesting story while he was signing this card. He said that you have to be really careful with this card because it likes to smear. I just thought "whatever" and kind of chuckled. Then he said that he was serious; for some reason, this particular card smears more than his other cards. I just said "ok" and left that converation confused. Ryan, from the Great Orioles Autograph Project, was right beside me and I asked him if he knew what John was talking about and he didn't have a clue.

Is there a glossy version of this card? Was there a Tiffany set or were the Nestle cards glossy?
at 5:41 PM

Topps did produce a Tiffany set in 1984, but the OPC & Nestle versions were on the same type of cardstock as the regular Topps cards.

Could it have been some sort of Fan Favorites reprint? I still can't really figure out what it could be.