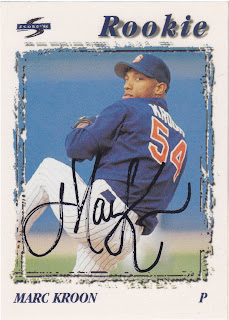 This is the third Padrograph of the week and the second Marc. If you have never heard of Marc Kroon, don't feel bad. He never had much Major League success.

He pitched in 16 games for the Padres between 1995 and 1998. In limited work, he had an ERA of 6.46. The Padres traded him to Cincinnati during the '98 season and in 5.33 innings with them, he gave up 8 earned runs. He wouldn't appear in the Majors again until the Rockies gave him a chance in 2004. It was more of the same with them.

For some reason, I cannot find any stats for him between the 2000 and 2004. He was signed by Anaheim during the 2003 season, but he has no stats. Either he was hurt for an extended period of time or maybe he pitched in Korea. I have no idea.

Anyway, after his failed endeavor with the Rockies, he headed over to Japan and has been a dominant closer over there. In 2008, with the Yomiuri Giants, he led the Central league in saves with 41. He even has his own website. Unfortunately, it is partly in Japanese. But, if you have some spare time, make sure to listen to his rap about himself during the intro. It's classic! Also, he makes a big deal about pitching 161 kph. I am assuming that is fast, but I'm too lazy to figure it out on Thanksgiving.

Happy Thanksgiving everyone!
at 11:18 AM

I do remember him as a Mets prospect with a somewhat unusual name. He got traded for the immortal Frank Seminara in the early 1990s.

Nice to know that he's doing well in Japan.

Thanks for the conversion.

It's been a while since he was a Mets prospect. That is cool that you still remember him.

I hope you had a great Thanksgiving Zman!!