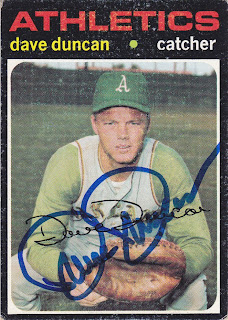 Here is another TTM that I got last month. This one features the Cardinals pitching coach and Tony LaRussa's right hand man, Dave Duncan. I sent this to Dave (c/o the Cardinals) about two weeks before the season ended and got it back about a week after the Cardinals got eliminated from the playoffs (and the day after I got the Reuss card back).

I picked this card up at the card shop one day while I was rummaging through the boxes of older cards. I always try to pick up cards of current coaches from their playing days, just in case I have a chance of getting one signed. While this card was sitting on my desk with a bunch of other cards, I saw on The Great Orioles Autograph Project that Dave was a good TTM signer. So, I decided to try to get it signed that route since it would be very hard to get it signed in Kansas City. There are always way too many Cardinal fans there when they come to town.

Dave had an eleven year Major League career with the A's, Indians, and Orioles. He was a career .214 hitter that had some pop. In 1971, he was an American League All Star and in 1972, he hit 19 home runs. He finished his career with 109 dingers.

Dave has been Tony LaRussa's pitching coach since 1983. According to his bio on the Cardinals website, his 30 years spent as a pitching coach is a Major League record.

On a side note, that is one ugly uniform that the Dave is wearing. It looks more like a tank-top than a sleeveless jersey.
at 5:47 PM

I think I may have to look for a Dave Duncan card or two this off-season.

I too will be rummaging around for some Duncan Docards this winter.

Double D's, he has a great sig. I like when they make it a little different. Great TTM.

I'm glad you had success with Dave too. And that is a very ugly jersey.