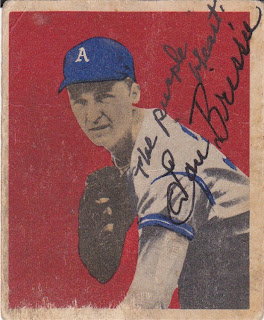 Normally, I would have waited to post this card after I finished off my 1996 cards. But, I was so excited when I got it back in the mail today that I didn't want to wait.

I got the idea to write to Lou Brissie from Carl Crawford Cards. A couple of months ago, he did a post on Lou and I learned a lot about him from that post. Lou took some shrapnel in his leg during World War II. The doctors wanted to take his leg, but Lou wouldn't let them. He still wanted to play ball. So after countless hours of rehab and almost two dozen surgiries, Lou was cleared to play ball agian with a brace on his leg.

The Philadelphia A's went ahead and signed him. After two years in the minors, Lou got a cup of coffee with the big club at the end of 1947. In '48, he stuck with the A's and made numerous appearances for them, both in relief and as a starter, until he was traded to Cleveland in 1951. He pitched for them into the 1953 season before he called it quits.

In 1949, Lou made the American League All Star team. He pitched the final three innings of the game and probably would have recorded a save if that was a stat then.

When I wrote Lou, I told him that I was sure that he had been awarded numerous awards and medals for his service. I asked if he would inscribe the card with the one that meant the most to him. He picked his Purple Heart.

I was lucky enough to find this card on ebay with a buy it now price of $2.29, with free shipping. Sure, it is a little beat up, but the card is sixty-years old. That seemed like a good deal to me. Plus, I now have a new oldest signed card. It is going to be hard for me to top this one.

Thanks CCC for the inspiration and the address!
at 9:53 PM

What a great story.

That is awesome! Congrats!

I have the same card but is signd on the side if u would like to buy my email adress is cc261@live.com