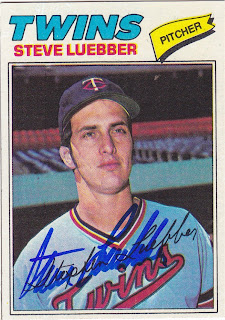 Here is a card that I got signed at the Wilmington Blue Rocks playoff game in September. Steve is the Rocks pitching coach and he doesn't seem to like signing too much.

Before it started to rain prior to that game, I went over to the bullpen where Steve and the starting pitcher were. I asked him if the rain was going to hold off and he just mumbled something to himself. When he was heading back to the dugout the second time (once when the rain came and then before the game actually started), I called out to him twice to come over and sign and he just ignored me. Finally, my buddy yelled out his name loud enough to be heard on the other side of the diamond and he finally acknowledged us and came over and signed this card. Like Luis Pujols, Steve Luebber falls into the Mustafa category.

You just have to ask him three times.

Steve had a very long pitching career. His first season in pro ball was 1967 with the GCL Twins. His final season was 1988 with the Wichita Wranglers. During that time span, he had five stints in the Major Leagues. The first three came with the Twins 1971, '72, and '76. He pitched in 58 games as a Twin, mostly as a reliever. He then appeared in one game with the Blue Jays in 1979 and gave up a run without recording an out. In 1981, he pitched in seven games with the Orioles and posted a 7.56 ERA. That was his last appearance in a Major League game, yet he kept the dream alive and pitched for five more seasons in the minors.
at 4:18 PM

These guys should be happy when someone asks for their autograph. It's not like they are overwhelmed with requests. Oh well, for every no-name jerk who are lucky someone remembers them there are great signers like Bobby Doerr

I had problems with him at a Keys-Blue Rocks game earlier last season and had to use a female friend to persuade him to sign. Same deal with me, I called his name while he was doing nothing and he just ignored me. Oh well, I guess at least he signs at some point.

Ryan- I'm glad that I wasn't the only one that had problems with him.