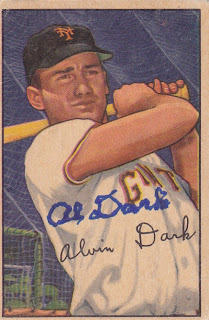 This is actually the second Al Dark autograph that I have received through the mail. I got the first one last year on a Ted Williams Card Company card and I was happy with it. But, a couple of months ago, I noticed that Wicked Ortega, from My Past Time...I Love It, was having a lot of success with many of the players that I wrote to last year and even some that I hadn't written to. So, I thought that I might as well try to find some older cards of some of the players that I have newer cards signed of. It is always cool to have some vintage stuff signed and these guys aren't going to be around forever.

So, this is my first success this year from a player that had signed for me last year. I upgraded from a 1993 card to a 1952 card and this card is pretty sweet. Al is in the middle of batting practice and for some reason, half of the net looks very much like a spider web.

I picked this card up from ebay for a couple of bucks. It took seven days to get the card back from Al.
at 2:40 PM