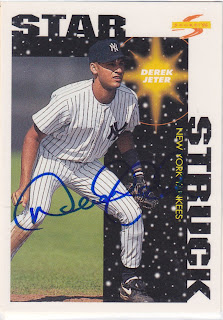 Here is another great through the mail success that I had in the mid-90s. By this point in my life, I was over half-way through high school and hardly bought any cards, let alone sent them off. But every now and then, that little kid in me would send off a few TTMs. This is one that I am glad that I sent off. I just wish that I would have sent a card without starry night on it.

For most of my childhood, the Yankees were bad. They weren't Evil Empire bad, they were just bad at being competitive. So I had no reason to dislike the Yankees. What is the point in not liking a bad team? But, strangely, prior to getting back into autographs in 2008, I only had three signed Yankee cards from my school days. There is this one, J.T. Snow (that was probably signed when he was an Angel), and a Sam Militello Jr. minor league card. I had many more signed Royals cards (in-person and TTM) and I could not stand them growing up. But, I guess the reason for this is because the Yankees were pretty awful there for a few years. Besides Don Mattingly (who didn't sign TTM), they didn't have a whole lot of players I felt like writing to.

Obviously, the Yankees have been a different team the last decade and a half than they were the prior decade. Much of that revolves around Derek Jeter, the future Hall of Famer and 3,000 hit club member (he's only 253 hits away). While I can't stand the Yankees, and am in no way, shape, or form a Jeter fan, I certainly appreciate what he brings to the table and the professionalism with which he does it. The guy truly seems like a class-act.

This just goes to show you why it pays to write to the younger players. They get less fan mail than the established players and are more likely to sign. While you may get a bunch of autographs from guys that never make a name for themselves, every once in a while you may get a future ten-time All Star. You just never know.
at 9:59 AM

That's right....you never know what you'll have in ten or fifteen years. It always pays to get what you can.

Nice catch. I can't believe there was a time that Derek Jeter signed cards through the mail!

I'm not a Yankee fan or a Jeter fan, but that was a nice one.

Nice. I got him TTM around the same time too. Still one of my favorites.