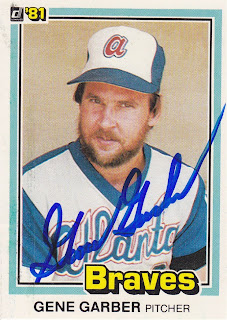 Here is the second of two autographs that I got from Gene Garber last month. You can see the first one by scrolling down a bit.

Since I mainly talked about how much I supposedly look like Gene on the first post, I will talk about his playing career on this one. During a 19-year career, Gene pitched in 931 games. All but nine of them were in relief. He pitched for the Pirates, Royals, Phillies, and Braves and had 218 saves. He had a career high of 30 saves in 1982 with Atlanta. He was never an All Star and he never appeared in a playoff game.

Two stats stand out to me. One is that he made nine career starts (one with Pittsburgh and eight with Kansas City). In those starts, he recorded four complete games (all with KC). I guess that just goes to show how much the game has changed in the past 35 years.

The other stat is his 1979 line with Atlanta. That year he recorded 25 saves, which tied a career best at the time and was the second most in a season for him during his career. He finished third in the league in saves that season. But, he also finished the season with a 6-16 record and a 4.33 ERA. I don't know how to look that one up, but 16 losses by the closer with the third most saves in the league has to be some kind of record.

Finally, I can't finish my final Gene Garber post without showing off his business card that he sent along. Apparently, Gene is now an emu farmer. So, if you are ever in need of emu oil for pain relief or as a skin conditioner, you now know where to go. 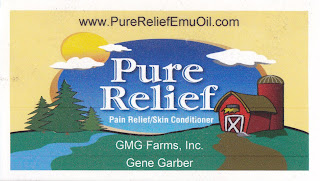 Gene had a good solid career. Lots of good "B reliever" APBA cards.