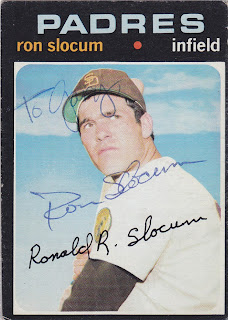 Here is another '71 Topps that I got in the mail last month. But, unlike the other three, this one came in a package from Rod, of Padrographs fame.

Prior to this card, I had never heard of Ron Slocum. After looking at his stats, it looks like he was an original Padre after being picked up in the '68 expansion draft. His short Major League career was spent entirely with the Padres. He got into 80 games with them between 1969 and 1971 and hit .150 while splitting time at second, third, shortstop, and catcher.

The best part of this card is that it is made out to Gary. Gary, if you are out there, I have your card now and I'm keeping it.

Gary is seriously po'ed at you now!! Seriously, Rod has a great collection like you!