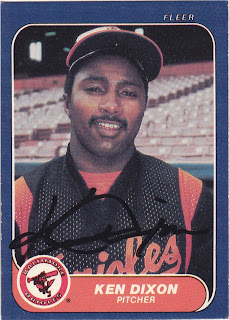 Here is another card that I got signed in Baltimore. Ken was one of three Orioles alumni signing before the game. Luckily, Ryan, from the Great Orioles Autograph Project, knew Ken was going to be there and he brought me this card. This was the only Ken Dixon card that he had to spare, so I feel pretty lucky that I was able to get it signed. Thanks Ryan.

I was surprised to see that Ken's career lasted less than four seasons. While I don't really remember Ken's cards from my early collecting days, I do remember the name for some reason. Because of that, I assumed that he played at least into the '90s, but that is not the case.

Thanks for the shout out Zach. I'm glad we met up that day.