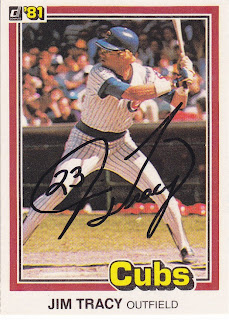 Here is another TTM that I got back last month. Jim is the manager of the Rockies and I sent the card to them at the end of August. I got it back shortly after the Rox were eliminated from the playoffs. I sent this out not knowing if Jim signs or not, so I was pretty happy to get it back.

Jim's Major League playing career lasted two seasons and 185 at-bats in 87 games. He was a .249 hitter who had 5 doubles, 4 triples, and 3 home runs. After that, he played two more years in AAA and one year in Japan.

Jim is probably better known for being a manager than a player. He managed the Dodgers for five seasons. He had a winning record every year but one and he led them to the playoffs in 2004. His final season with them was 2005. After the Dodgers let him go, the Pirates quickly picked him up and he spent two seasons in Pittsburgh. He lost over 90 games in each of his two seasons there before they let him go.

I have no idea what he did last year, but he started this year as the Rockies bench coach. After Clint Hurdle got fired, Jim took over an under-achieving team and got them back on track. Under Jim, the Rockies went 74-42 and almost caught the Dodgers in the West. Instead, they settled for the Wild Card and lost in the first round to the Phillies.

I thought that it was pretty cool that Jim included his number from his playing days on the card. I liked that he put it in an easy to see spot, too.

Now that is what a sig ought to look like. He and Jerry Reuss should give lessons to today's generation of players.

No joke. But to be fair, I'm sure that todays players sign many more autographs during their career than the old-timers did.

I know that my signaure changed drastically when I took over my company's arms room and I would have to sign my name a few hundred times a day during certain spans.

My signature has been jacked-up ever since.

Tracy was the second to last Cub to wear #23. After him, they gave the number to a throw-in from the Larry Bowa/Ivan DeJesus trade, some kid named Sandberg.

I didn't even think about 23 being Ryno's number. Good call.

As far as '81 Deez goes, that's a great looking card. Jim's autograph is pretty nice. All adds up to an epic addition to your collection. Nice!