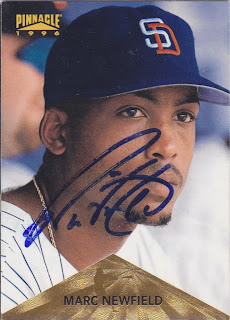 Here is another Padre autographs courtesy of Padrographs. This one features Marc Newfield. I remember Marc's rookie cards. He seemed to have a few prospect cards in various sets in the early '90s as a Mariner.

Unfortunately, he could never live up to the prospect status. In a three year period, he only played in 58 games as a Mariner and hit around .200. The M's shipped him and Ron Villone off to San Diego for Andy Benes. Marc played for the Padres for basically one year and got into 105 games and hit .264. With those numbers, the Padres were able to trade him and Ron Villone (and Bryce Florie) to the Brewers for Greg Vaughn. So in the end, the Padres basically traded Bryce Florie, Andy Benes, and some guy named Greg Keagle for Greg Vaughn. I would say that that was a very good trade.

After the trade, Marc hit .307 with 31 RBI in the final 49 games of the season. He only got into 50 games the next season and he hit .229. The next year, he got into 93 games and hit .237. That was the last time he appeared in the big leagues. The following season, he appeared in 4 games with Boston's AA team and 7 games with Oakland's AAA team. He appears to have hung them up after that.

I have no idea what is going on with his signature. All I can say about it is that it is unique.
at 4:57 PM

I think he was a top five draft pick one year. Though I don't think his cards were ever hot prior to him making it to the majors, he was thought to have some potential

I only remember Newfield for all the prospect cards. I doubt that I ever saw him play at all.

He definitely has a unique autograph... not quite as original as some, but I wouldn't care to try to decipher it.

Unless you'd seen it before, there is no way you could know that is Marc Newfield from the sig. I don't know if any of the letters are actually there!

My confirmation word is crampee which is what my eyes do when I look at his auto.

I agree completely Brian and that certainly is a fitting word verification.