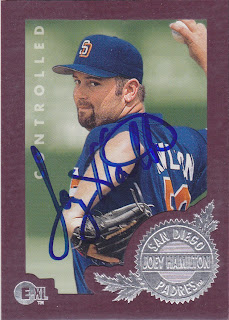 For some reason, I thought that I already had posted a Joey Hamilton autograph on here. It turns out that I was wrong. Luckily, I am posting one now, courtesy of Rod.

Joey had a ten-year Major League career with the Padres, Blue Jays, and Reds. In 1996, he had a career high 15 wins and 184 strikeouts. He ERA was 4.17 that year and that would be his lowest over a whole season for the rest of his career. It just kept balooning as the years went on. But, he did finish his career with more wins than losses (by one), a 4.44 ERA, and 4 home runs at the plate. He also made one appearance in the 1998 World Series and pitched a scoreless inning.

This card is the only card from this set that I have. It is kind of weird. The brown border is raised like it is supposed to be a picture frame or something. Plus, I have no idea why it says "CONTROLLED" on the left side. I'm sure I could figure that out if I looked at the back of the card. But what would be the fun in that?

Yet another guy who gives me horrible flashbacks to my fantasy baseball days.

Every player in that set had a description on his card.

It was an awesome set!

It is a good looking set and I appreciate the feedback.

I just wonder what "controlled" means. For a pitcher, I can understand "control". But, when they make it past tense like that, it almost says that the team has him for a few more years before he is arbitration eligible; that kind of control.